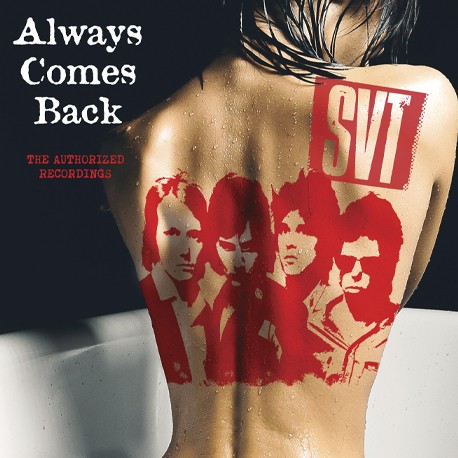 The late 1970s and early 1980s were an explosive and exciting period for music and the local San Francisco music scene was no exception.  I had been playing constantly from 1965-’72 as Jefferson Airplane, continuing on as Hot Tuna on through 1977. Hot Tuna took a bit of a break and SVT was born of this period. These recordings represent this period for me so well! Brian, Paul, Bill, Nick and I made some exciting and somewhat furious music of this time period, bringing back such memories of all our live shows! Listen and enjoy, for I know we all did!!!
—Jack Casady

One night I walked down from my (& Stanley Greene’s) Flat on Salmon Alley just above the Broadway tunnel....And I got to the Mab and there was a crowd INTO THE STREET....I was thinking WTF? and went to the backstage door & POUNDED.....My buddy Les let me in. It was fuckin SARDINES....There was a different PA. (not the Mab shit. A REAL WHOOPASS PA.....There were maybe 25/50??? I don’t know...MORE than the Mab’s SIX lights.....There  were Ampegs All over the stage. A Riser. A Black Sonor Kit. 2 guitars on stands ( A Gold Top & A Red LP SPECIAL. A WALL OF KEYBOARDS & More amps & I was thinking “WTF IS THIS SHIT????” The band came on and a HURRICANE of sound engulfed me. IT WAS SO FUCKING LOUD. But it was PERFECT. It didn’t HURT.....By about the 4th or 5th song I could FEEL THE ENTIRE ROOM START TO LEVITATE from the Earth.....”I said to myself, THIS IS IMPOSSIBLE”......But I was THERE....It BLEW ME INTO “The Next Phase”....THIS IS MY BAND......I WILL BE IN THIS BAND!. I then started a carpet bombing campaign on Nick Buck That “I AM THE RIGHT DRUMMER...I KICK ASS I CAN PLAY ANYTHING BETTER THEN ANY BODY” ....yes I was Over the top......BUT ANY BAND that could levitate THE ENTIRE MABUHAY SIX FEET INTO THE AIR HAD to be MY BAND!!! With ME we could do EIGHT FEET.......And We DID........
—Paul Zahl

SVT was a
special PLACE in TIME, we came together quickly, we had camaraderie and a singular vision, we wanted to ROCK. The songs were good, and they got even better. The times shaped us, but we also shaped ourselves. We became a physical machine. The music was visceral, you could feel it, and if we played Hard, we’d then play HARDER and if it got Fast, we’d play even FASTER.

Catch a breath next song, please! We had groups of fans with names like “The Meat Cutters”, that tells ya something. SVT was a roman candle that you couldn’t hold in your hands. Like that quote from BladeRunner “The light that burns twice as bright burns half as long”.
—Nick Buck

When I was in college, I booked the Jefferson Airplane to play a concert at Stony Brook and got to know Jack way back then. Fast forward a dozen years or so and Chris Knab brought this cassette with the song “Heart of Stone” to our late, late night KSAN radio show. I kind of remember that we played it 3 times in one night. “You think we can get these guys to let us put it out?” I asked him. Neither of us thought there was any chance. I mean, Jack Casady? How could that ever happen? But it did. And it was like we really, really were in the music business after that!
And “Heart of Stone” was just the beginning. The band kept coming up with amazing songs, one after the other. Of course, they were perfect for my radio show (and for my car cassette player) but I knew we would be releasing more than a single on 415-- and we did. Their music was exciting and compelling. It’s a shame it never got picked up on big radio stations. SVT would have been stars.
—Howie Klein (415 Records)

SVT was like a chainsaw at full throttle being thrown into a crowded elevator, you never knew what was about to happen. Energy coming off the stage so thick you could cut it with a sharp knife....Amazing band...Somehow I made it out alive...
—Chris Coyle
Manager