> Movies>Ed and HIs Dead Mother
New 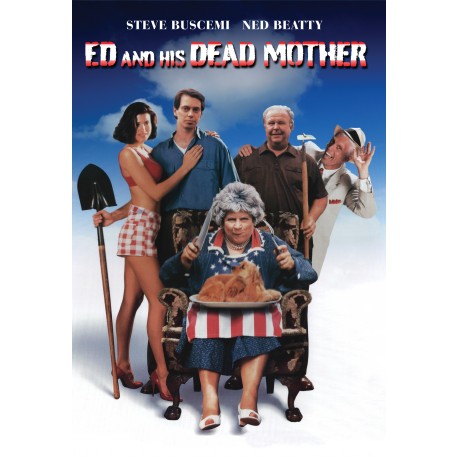 Ed and HIs Dead Mother

Steve Buscemi (Reservoir Dogs, Fargo), Oscar®-nominee Ned Beatty (Deliverance, Network), and John Glover (Smallville, Numb3rs) star in this wickedly comic tale of a devoted son who who learns that bringing his mom back from the dead is a grave mistake!
For an awkward mama’s boy, Ed Chilton (Buscemi), the loss of his beloved mother (Miriam Magolyes: Harry Potter and the Deathly Hallows, Part II) was more than he could bear. So when smooth-talking salesman A.J. Prattle (Glover) claims he can reanimate Ed’s mother for a miminal fee, Ed naturally jumps at the offer. Sure enough, the next day mom is back, good as new. Almost. Because as Ed and his uncle Benny (Beatty) are about to discover, death has a way of changing a person. And in mother’s case, it’s a change for the worse. Lots worse! Especially when his undead mom, who’s developed a few unpleasant habits, finds out the seductive new girl next door (Sam Jenkins) has romantic ideas about her little Ed.
Unfortunantely, by the time Ed realizes his mom might be better off dead, it’s too late. Now she’s addicted to life. And it’s going to be tricky, and expensive, putting her back where she belongs: six feet under. It’s family values run amok in this brilliantly offbeat, outandishly hilarious comedy romp that proves a mother’s love...never dies!