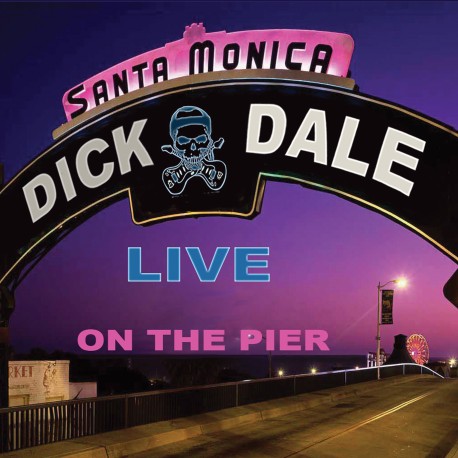 King of the Surf Guitar, Dick Dale, plays at the world-famous Santa Monica, right over the water.

You never really know just how appropriate the nickname “King of the Surf Guitar” is until you see Dick Dale play live. The power of Dick’s technique is the sound he invented, the harder edge style of playing surf music that others imitated but never quite duplicated. No other player and no other group from that era can claim that kind of pioneering style and showmanship. Case in point, “Miserlou” was used as the main title theme in Quentin Tarentino’s “Pulp Fiction”. It is a classic instrumental, a timeless rock masterpiece that remains absolutely perfect over 50 years after its initial release and will still sound fresh 50 years from now.
By the date of this performance, July 22, 1996, people had accepted the reality that compact discs were a viable way to preserve and listen to music. A lot has changed in the world since Dick Dale took the stage at the Santa Monica Pier on that warm summer night but one thing that hasn’t been and cannot be changed is the magical experience of seeing him perform LIVE. This particular show was a part of the Twilight Dance Concert Series put on by the City Of Santa Monica. During that concert series, a compelling array of great artists performed there in the month of July including Buck Owens, Los Lobos, The Texas Tornados and Jimmy Cliff, to name just a few. So, for Dick Dale to appear on balmy evenings, suspended over the Pacific Ocean, well, what could be more perfect? The energy Dick Dale maintains throughout his show is pretty incredible. He performs all his signature songs plus future classics from his Hightone and Beggars Banquet album releases.
For those who consider themselves “Dickheads’” this is a rare moment, one to treasure as the vibe of the evening was perfect for this concert. Dick was in top form in the 90’s, blending the spirits of surf music past, present and future that remains alive and well in Southern California and this performance is especially appropriate because the venue is where surf culture really began!
The Santa Monica Pier actually dates back to 1909 and was originally two adjoining piers. The Pleasure Pier (aka The Newcomb Pier), as it was called, had a carousel (which remains in operation) and a wooden rollercoaster (long gone and replaced by a modern steel coaster). Over the years, the Pier has been used as a location in numerous films and television shows. In 1973, the Pier faced demolition, but the citizens of Santa Monica took a stand for its preservation and managed to prevail. The Pier was severely damaged in a storm in 1983, but by 1990 restoration work on the Pier was completed, making room for a deck area where live concerts could be held.
The Pier continues to attract endless tourists: it’s a historical landmark and is the western terminus for Route 66. Music on the Santa Monica Pier continues to thrive but this memorable concert on the Pier, before a jam-packed beach crowd, is among his best live performances.