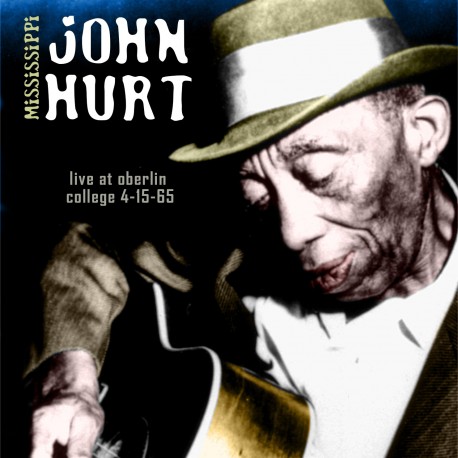 “Mississippi” John Hurt was not only one of the great artists of our century, but one of its most beautiful people. A number of great bluesmen were rediscovered in the late 1950s and early 1960s, including Son House, Robert Pete WIlliams, Bukka White, Skip James and more, and all met with great and deserved success with audiences who weren’t even born when these men made their first recordings. But the most unique and beloved of these great men was John Hurt.
I enjoyed the great privilege of recording Missississpi John Hurt in concert at one of the many brilliant performances he gave until his death. This one took place in the mid-1960s at Oberlin College in Oberlin, Ohio, and was a very special occassion consisting of two sets each by both Son House and Mississippi John. Nearly four thousand young college students and blues lovers sat enraptured as the set opened with Son House weaving tales of his checkered life, and demonstrating his raw and primal vocal technique and brilliant slide guitar.
As great as Son was, no one in the audience could have been prepared for what was to come. John Hurt came to the stage through the audience (he had been sitting in the balcony enraptured by Son’s performance) and within several minutes had the room of four thousand as one simple being. I have never seen any entertainer in any field radiate the warmth, humanity and love that this great man willingly gave to an audience of strangers young enough to be his grandchildren. And at that moment, and for the next several hours, we all felt as though we were in the presence of the wonderful grandfather we never had, a man who had been through so much, and had become the wisest and most loving of men for it. His singing and guitar playing were never less than spectacular, and his beautiful conversation between songs to the audience made each person feel as though he was speaking initimately and only to them alone.
At the finish of the second set, awed silence rose to thunderous applause, which lasted complete with standing ovation for a full five minutes. Hurt returned to perform several more numbers and attempted to leave once more. The audience would not have it. With tears of joy in his eyes he returned once again for several more numbers. Justice was served. After many years of being forgotten, all the love and adulation and respect that Mississippi John Hurt should have had so long ago were his at last.
—Robert Schert
1982