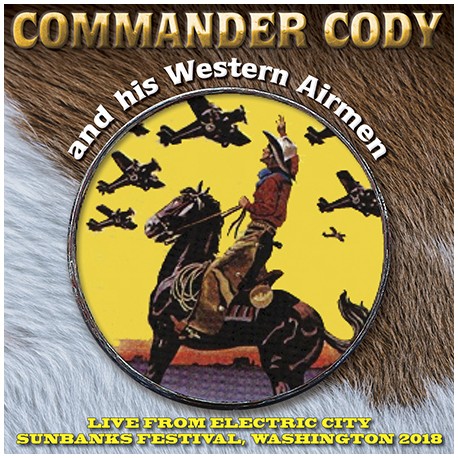 Live From the Sunbanks Festival
Electric City, Washington 2018
After some 20 years of roaming the countryside, playing what seems like every honky tonk in America, I have finally perfected the four piece rock and roll boogie band. It has taken a very long time and I’m happy to get it recorded.

The scene was the Sunbanks Festival in beautiful Electric City, Washington, on the shores of the Grand Coulee in front of thousands of culture lovers, on Saturday, September 8, 2018. No frills, no overdubs, nothing fancy, just four like minded reprobates doing what we do best: playing their hearts out and creating good time rock and roll music.

Tim Eshliman and I have been working together, on and off, playing and producing for 40 years. He plays bass and sings a lot in this band. Sean Allen, western swing hall of famer and pedal steel whiz plays the electric guitar in this group and sings a lot of the songs on this album. Steve Barbuto is the drummer here, been backing the Commander Cody groups for going on 25 years and sings “Don’t Let Go” for the first time live..

I think this is the best album I’ve done in 45 years and I hope you’ll agree….just basic rock and roll from the ozone…
—Commander Cody
November, 20, 2018