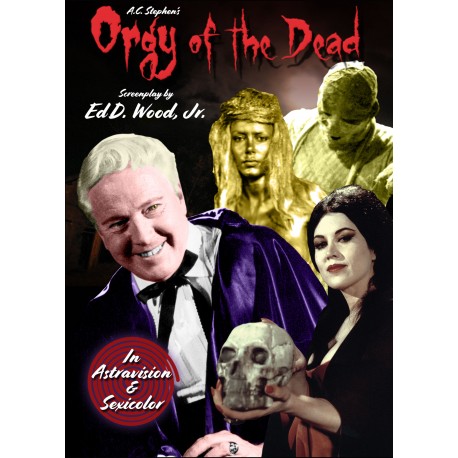 A horror novelist (Bob) and his girlfriend (Shirley) are taking a leisurely drive one evening in search of an infamous graveyard that will inspire his next novel, which ends when Bob loses control and drives over a cliff….and then it gets really weird. Bob and Shirley awaken in the midst of a series of bizarre rituals conducted by The Emperor (Criswell) and his faithful servants including nude dancers, a werewolf and a mummy. Throw in some sado-masochism, snakes, skeletons and more naked women and you have the entire plot.
Written by the venerable Ed D. Wood Jr.(Plan 9 From Outer Space), directed by cult movie maverick Stephen C. Apostolof (working under the pseudonym A.C. Stephen: Fugitive Girls, Lady Godiva Rides), Orgy of the Dead is a thoroughly campy, marginally sexy, and thoroughly outrageous gem starring the Amazing Criswell (Plan 9 From Outer Space) and Pat Barrington (Shirley/Gold Girl).
The production budget was estimated at $30,000, made possible because Wood served as writer, production manager, casting agent, and even held up cue cards on this low-budget film, although he did not direct..
Released
June 1, 1965.