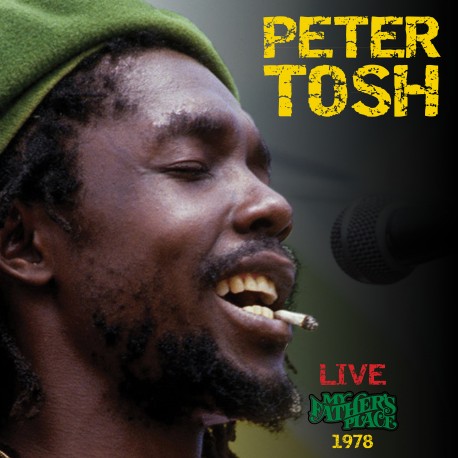 Hear Peter Tosh's authentic glory as one of reggae’s greatest artist’s ever turns Long Island into Short Island and takes its music community into his heart and soul.

Available on LP at

Back during the summer of 1978, in the weeks previous to the wonderful live performance contained on this recording ... the airwaves of 92.7 WLIR, the legendary progressive fm radio music outlet on Long Island, New York, were supplying enormous air play rotations to their dedicated tri-state listen­ership of a new version of an old song. Entitled “You Gotta Walk (And Don’t Look Back)”, in its original incarnation, the song had been a minor U.S. hit for the legendary Motown vocal group “The Temptations.” However, the version WLIR was now introducing to its audience was a solid, triumphant reggae interpretation. It featured a debut solo performance from a truly authentic Jamaican rasta vocalist in a duet with the most famous rock lead singer in the world, Mick Jagger of The Rolling Stones. You see, Mick was guesting with the newest artist signed to his band’s brand new recording label, called Rolling Stones Records. The singer’s name was Peter Tosh! Peter’s prior resume before signing on with the Stones is part of music history lore. Born Winston Hubert McIntosh in Jamaica, he was one of the core original members of The Wailers, along with his friends Bob Marley and Bunny Livingstone. If that isn’t enough legendary pedigree, at the time of this recording, Tosh became the only authentic reggae artist to ever record under the legendary lips trademark of The Rolling Stones! Tosh’s debut album for Mick and the boys was entitled “Bush Doctor.” Shortly after its release, My Father’s Place owner Michael “Eppy” Epstein contracted Peter’s band to play the stage of his beloved Roslyn, New York nightclub for a concert to be broadcast on the radio as part of WLIR’s world famous live concert series. Needless to say, the confluence of airplay enthusiasm, Rolling Stones involvement and limited ticket availability to the club’s intimate confines for this one time historic event caused pandemonium to ensue. Add to that the fact that Eppy had become a music industry reggae pioneer. He was at the forefront of introducing the sweet rasta musical vibrations as a new phenomenon then to the U.S. market. That only added to the anticipation of this authentic world music’s entree to the limited appeal hysteria of what was then a burgeoning music scene crossing new genre’s called punk, new wave and ska within rock music. Oh yes, then there was the rumour mill, a rabid one, rich in its combination of The Rolling Stones, reggae, My Father’s place and WLIR. It was no secret to those in the know that the stones, particularly band guitar­ists Keith Richards and Ronnie Wood, were no strangers to the insides of Long Island’s greatest music club. I can personally testify spending time with both, late in the evening, at one of the club’s regular reggae nights previous to this Tosh show. So, by the time the line had snaked around the building and way down the street prior to the door’s opening the night of the show, madness had exploited the local media, particularly newspapers like the New York Post, with the possibility that The Stones were going to join their newly signed artist in performance. Frankly, it wasn’t realistic given their own touring activities but no one knew for sure, including those of us working on the show backstage and in the sound truck. In the end, the stones never rolled into Roslyn that night. From an excitement standpoint, it proved unnecessary. Outside, it rained, soaking the thousand or so fans waiting for non-existant standing room tickets. Inside, the electricity and the magic in the room, and on the air, was amazing, as you will hear now for yourself. As for the artist himself, I remember Peter arrived majestically that afternoon with an assurance and a band that the sound check proved were about to take us all to musical ports we had yet to experience, to explore and to totally enjoy. Former manager of My Father’s Place, noted entertainment attorney David Baram, remembers: “Eppy and I had already worked with Peter Tosh on his tour (with Burning Spear and Big Youth), prior to that night. Peter’s band, ‘Word. Sound and Power,’ by then were incredible. That night they were ferocious! Mikey Chung, the guitarist, was exceptional. It’s particularly noticeable on the opening theme and just grows from there!” Now, it’s all yours! So, turn up the volume and imagine as you now can the antici­pation, the excitement and the wonder that encapsulated us all as the light’s came down and the musicians hit the stage. Hear authentic glory as one of reggae’s greatest artist’s ever turns Long Island into Short Island and takes its music community into his heart and soul. In the end, the only shining star for this evening was a man named Peter. Bless him for that.