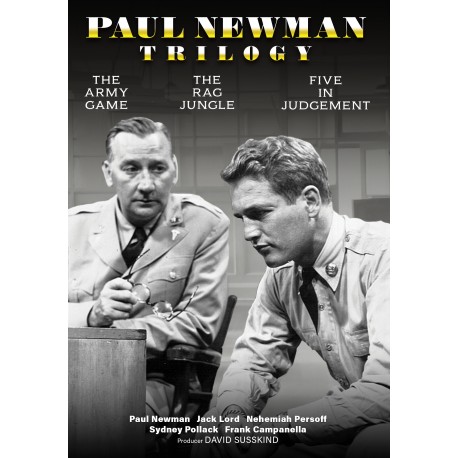 When two hitch hiking college kids encounter a terrible storm and are forced to seek shelter in a diner of a small farming community. Reports that a murder has been committed nearby is over heard on the radio and the two kids match the description of the killers. The diner owner and customers tie the students up, terrorize them until the truth comes out.
Run Time: 29:26
(Aired 4/10/55)
Paul Newman, Jack Lord and Frank Overton
Directed by Robert Stevens

Working in the garment industry, Charlie refuses to pay the protection money demanded by racketeers. After his father Vito is beaten up, Charlie organizes the other clothing manufacturers into standing together against the mob.
Run Time: 58:51
(Aired 11/20/56)
Paul Newman, Nehemiah Persoff, and Frank Campanella
Directed by Franklin Scheafer

Danny has a plan to get out of his time in the army, to get a discharge. His issues go deeper than a disdain for the military An army psychiatrist sees through Danny’s ruse, but it’s not until he is attacked in the barracks they grant him a discharge, and he finally recognizes his deep emotional issues.
Run Time: 59:10
(Aired 7/3/56)
Paul Newman, Frank Campanella and Sydney Pollack
Directed by Franklin Schaefer