> Scott Ellison: There's Something About The Night
New 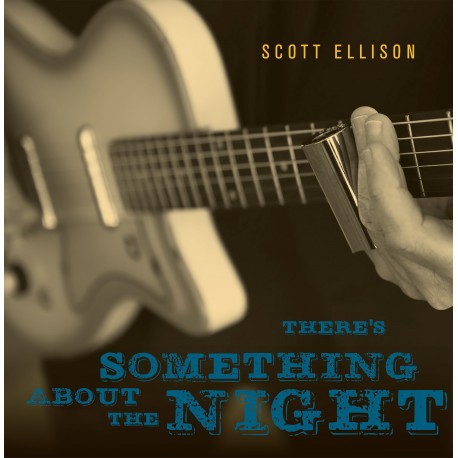 Scott Ellison: There's Something About The Night

"The hundredth anniversary of the Tulsa Massacre had just happened, and even though the song is really about the fallout from a relationship gone south, it's not a big jump to paint with a bigger brush and apply the lyrics in a much broader context." - Scott Ellison

For his new album, Scott Ellison had the opportunity to fine-tune his approach to every aspect of the creative process, and results are stellar. Sidelined from his usual wall-to-wall touring because of Covid lockdowns, he took advantage of the time spent at home to create the most focused album of his multi-decade career. "This is my 13th album, and it's the first time I didn't have to go through a start-stop start-stop recording process," he relates. "Like pretty much everyone else, starting around March of last year, I was stuck at home! I would get up at 5:30 or 6 in the morning, pick up my guitar, and just work on songs. Being forced to be off the road might have been the best thing that's ever happened to me from a creative standpoint." Over the course of 14 tracks, Ellison's searing guitar and soulful vocals make for a potent one-two punch. From a Chicago-meets-Texas shuffle to full tilt blues-rock workouts, pure soul blues and just about every point between, the album checks all the Blues boxes and then some. Writing and recording from his hometown of Tulsa, OK, the record features his primary backing and touring band on some tracks and an array of Los Angeles-based all-stars including members of Eric Clapton's band and Albert Lee's band on others. Ellison also co-wrote 10 tracks with Michael Price (who penned "Ain't No Love (In The Heart Of The City)" along with Danny Walsh for Bobby "Blue" Bland, and which Ellison gives a soul-stirring treatment to for the record's first single and video). "Working with Michael was an eye-opening experience. We just added all these layers and textures to the songs." With an array of styles woven together in one cohesive package, There's Something About The Night takes Scott Ellison's past and present and reinvents them as a bold template for the future.

Singer-songwriter, guitarist Scott Ellison emerged as a blues-rock powerhouse in his hometown of Tulsa, OK in the late 1970's. With Eric Clapton's and Freddie King's backing bands at the time both hailing from the region, Ellison's guitar shredding heavy blues style quickly brought him regional and then national attention. He first gained notice playing with Jessica James (Conway Twitty's daughter) in 1977, and national blues audiences learned about him via his work in iconic bluesman Clarence "Gatemouth" Brown's touring band in 1980-81.

He relocated to Los Angeles, CA in the mid-'80s, and honed his chops as a session player for everyone from The Box Tops to Gary "US" Bonds to Peaches & Herb. By the early '90s he finally took the helm as a leader, formed his own band, and opened for the likes of Joe Cocker, Roy Orbison, The Fabulous Thunderbirds, Leon Russell, Bobby Bland and Buddy Guy. Solo albums soon followed, beginning with Chains of Love in 1993 and Live at Joey’s in '95. He returned to Tulsa in '96 and released Steamin’ the following year and One Step From the Blues in 2000. He signed with Burnside in 2001 and released Cold Hard Cash, which was produced and co-written by longtime Robert Cray producer Dennis Walker. That album, along with the 2003 follow-up Bad Case of the Blues, marked the beginning of a watershed moment for Ellison that resulted in headlining slots at blues festivals across the US, Canada and Europe along with multiple European tours.

2008’s Ice Storm yielded his first #1 on the Blues charts with "Cadillac Woman,” and led to opening for and playing onstage with BB King at the Performing Arts Center in Tulsa in 2009. Walkin’ Through The Fire was released on his own label, JSE Records, in 2011, paving the way for his 2013 induction into the Oklahoma Blues Hall of Fame. He signed with Red Parlor Records in 2015 for the release of Elevator Man (produced by longtime Eric Clapton keyboard player Walt Richmond), Good Morning Midnight (2017), and the critically acclaimed Skyline Drive (2020).

Beyond the traditional blues world, Ellison has also penned songs that have appeared in films such as Reindeer Games, Feast of Love and Home Front, as well in TV shows Sister Sister, Santa Barbara, Buffy The Vampire Slayer, Joan of Arcadia, Saving Grace, Home Front and Justified.