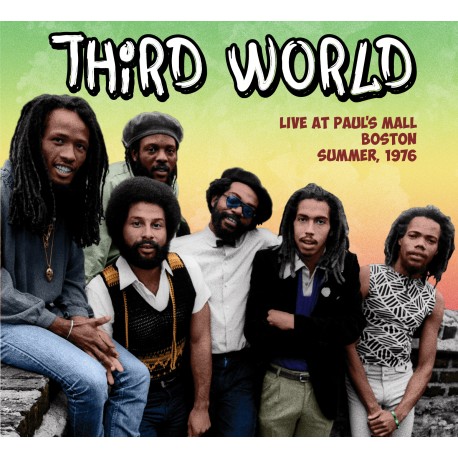 Third World is a Jamaican reggae band formed in 1973, renowned for their jazz, soul & funk influences.

Third World is a Jamaican reggae band formed in 1973, renowned for their jazz, soul & funk influences, who were quickly signed by Island Records soon after their formation. The group soon found themselves touring Europe with Bob Marley and the Wailers and only a few months before this show, released their self-titled debut album. Third World’s Paul’s Mall performance in May of 1976, is one of the most powerful sets of Reggae music ever recorded and stands the test of time even now, forty years later.

This live set keeps the energy flowing, showcasing Third World’s talented vocal harmonies, great instrumentation — keyboard, guitars, drums & bass rhythm sections — together and solo. The show includes masterpieces such as “Brand New Beggar,” “Freedom Song,” covers of Winston Rodney’s “Slavery Days,” and the Abyssinian’s “Satta Massagana.” This rare recording is a must for any fan of Reggae music, and probably falls into the top 10 best live Reggae shows ever!

Third World’s biggest hit came in 1978, a version of the O’Jays’ “Now That We Found Love.” They scored yet another blockbuster in 1982 collaborating with Stevie Wonder on “Try Jah Love.” Despite several line-up changes, original members Stephen “Cat” Coore and Richard Daley remain and the band continues recording and performing to audiences worldwide.

In 2008, Third World received a lifetime achievement award from Charles Drew University. In 2013 the group completed their 40th anniversary world tour and was awarded a Lifetime Achievement Award at the Jamaica Jazz and Blues Festival in Montego Bay.