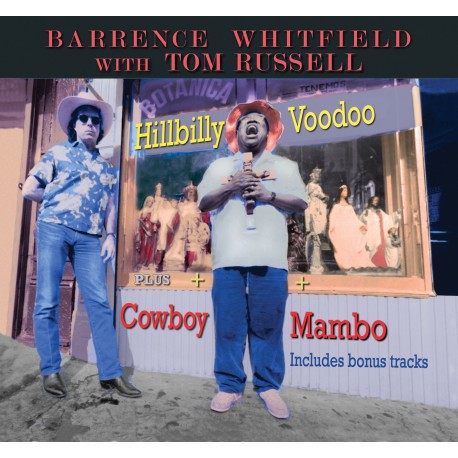 When I met Tom Russell, I was amazed by his presence and the knowledge of this man who can tell stories at the blink of an eye with such skill. His song writing is top notch, and to be part of the two projects we did together back in the ’90s (Hillbilly Voodoo and Cowboy Mambo), has made me an even more well rounded musician. Thank you Tom, you still sit tall in the saddle my friend!

“I met Barrence Whitfield back in the late 1980’s. I was playing the bars of New York City and Oslo, Norway, and Barrence was tearing up the scene in Boston with his group: The Savages. He’s still tearing it up today. We created our own genre we called “Hillbilly Voodo,” sometimes, and “Cowboy Mambo,” at other times. Tear down those generic walls, mama! I still agree with the original liner notes…and the records sound as fresh, and soulful, as they did in 1992. Long live Barrence Whitfield!”