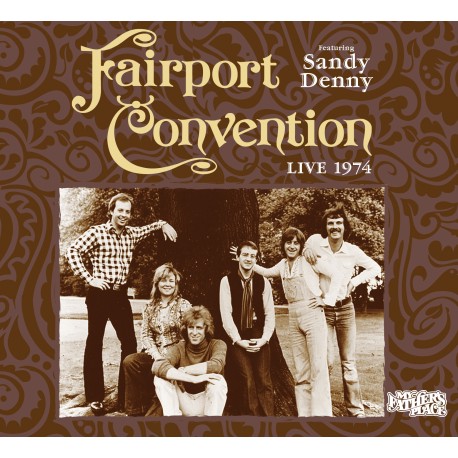 Fairport Convention featuring the sweet voice of Sandy Denny famous for her duet with Robert Plant in the Led Zeppelin song "The Battle of Evermore."

Fairport Convention was a very eclectic band. Some like to refer to them as English Folk Rock, but that moniker is too limiting as they went beyond the confines of that genre. Former members include Richard Thompson, Ashley Hutchings, Iain Matthews, Dave Swarbrick, Dave Mattacks, Trevor Lucas, Martin Lamble, David Rea and Jerry Donahue. This band formed in 1966 and later became very popular all over the world. They borrowed from both British and American folk and even blues traditions, melding them into a very distinctive sound. They were very influential especially since they featured one of the finest voices in popular music…Sandy Denny (previously with the Strawbs) who replaced the original singer, Judy Dyble in 1968. Sandy’s singing style was the focus of the band. They always managed to always compliment her style in their arrangements and compositions. Their first albums were not successful. They signed with Island and added Sandy to the lineup. Their first success was Leige And Leaf which probably did more for bringing English folk music to global attention. Even in America, FM radio stations were featuring tracks from their albums, Unhalfbricking being very popular with its unique sound and eclectic nature which fit in with the experimentation in Rock music, expanding its borders into blues, jazz and folk traditions. They even performed “Si Tu Dois Partir,” a French version of Bob Dylan’s “If You Gotta Go.” Fairport Convention (much like Pentangle and Renaissance) were unconventional in the global music marketplace.

The band has had to deal with tragedy. In 1969 their van crashed, killing Martin Lamble. Also killed was Richard Thompson’s girl friend, Jeannie Franklin. Soon after the accident they took time off to record a new album. Leige And Leaf was their defining moment and pushed up the British charts which resulted in sell out concerts all over England. They rose up from the tragedy and created one of the most successful albums in British history. On this album, they did not rely on covering songs by other artists i.e., Joni Mitchell, Dylan and Emitt Rhodes. They were now on their own, more inventive and improvisational as you can hear in “Matty Groves” which clocked in at 8:08. Fairport had definitely broken new ground and were gaining in popularity.

Even with success, there was some conflict about their direction resulting in the departure of Ashley Hutchings who went on to form Steeleye Span. Sandy Left and teamed up with Trevor Lucas to form the short lived, Fotheringay. A stunningly beautiful album that doesn’t get the credit it deserves, mainly because it harkened back to the earlier, more melodic side of Fairport Convention. Sandy Denny re-joined Fairport Convention in 1974 and this concert, recorded at My Father’s Place, was from the American leg of that reunion tour. The had just released Rising For The Moon, their most successful album in America. This is a very rare moment to hear Fairport Convention at the later stages of their career featuring Sandy Denny.

Sadly, four years later Sandy Denny would die of a cerebral hemorrhage in 1978 after falling down a flight of stairs. Her soft, sweet voice earned her a cult following much the same as Nick Drake. She was distinctive. She recorded one memorable song before she died, “Listen Listen,” which has gone on to be her defining moment as a beautiful, tender and vulnerable singer. Sandy’s original composition, “Who Knows Where The Time Goes,” was recorded by Judy Collins, who made it the title of her album. Sandy and the original Fairport Convention will always have a legion of dedicated fans in England. Hopefully, this concert will broaden their base here in America.