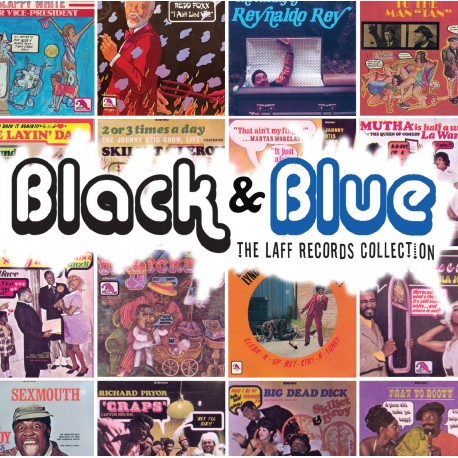 4-CD collection from the ground-breaking label that released some of the most important Black comedian LPs of all time!

I discovered party records when I was a kid. I’m from the West Side of Chicago, but I would spend my summers in Hannibal, Missouri known for Mark Twain and Tom Sawyer, with my mother’s side of the family. It was small town living, everybody knew everybody, and nobody locked their doors. This particular summer I was staying with my aunt Betty and my uncle Sam. I was 16, all the adults had gone to the only tavern in Downtown Hannibal and for some reason I ended up at the house by myself. As I wondered around the house with nothing to do I turned on the TV but there was nothing I wanted to watch. And then for some reason I decided to look through their albums. They had all the hits – the Temptations, the Dells, The Supremes. But then at the back of the album console I discovered some crazy looking album covers that I had never seen before with funny looking characters playing cards, or dancing, or a man in some crazy pose looking at a beautiful woman with lots of curves. Though the records had different titles they all said party records. Party records I thought “What is this? Who are these recording artists I’ve never heard of before?” But the party record covers made me laugh. I was curious and decided to put one on. It was Redd Foxx. When I first put the record on I heard some silly music and then an emcee introduced Redd Foxx. As he started to talk my mouth dropped open and my heart started to race. At first it was a guilty laugh and I looked around hoping that I wouldn’t get caught but I couldn’t stop. I laughed and laughed, I literally couldn’t catch my breath. I couldn’t catch my breath. I thought I was going to die. I remember falling on the floor laughing so hard at the way he used his words and unique phrasing, but I had also never heard anyone curse so poetically. Then I put on another album, Leroy and Skillet, they really looked zany and funny on their album cover, dressed in their underwear playing cards, with Skillet’s foot under the table holding two aces between his rusty toes. As I listened to them I laughed hard again with my sides hurting. My brain felt like it was going to explode, I had never experienced anything like this. Television was rated G. All the comedians I saw on the Ed Sullivan show were clean and never cursed. They were squeaky clean and almost corny. That summer I would always find time to escape from the other kids when the adults were gone and listened to the rest of those records like Jimmy “the Funky Tramp” Lynch, Wildman Steve, and Rudy Ray Moore. These comedians shaped another voice in me, a fun edgy side that could appreciate the voice of the working class everyman. Having worked as a filmmaker with some of the greatest comedians ever, getting signed by Richard Pryor, when he had a 40 million dollar deal at Columbia Pictures, to directing comedy superstar Eddie Murphy when he was at the top of his game performing in the highest grossing standup concert film ever, to finally directing the legend among comedy legends, Mr. Bill Cosby, in two different comedy specials. So, I think I know a little bit about comedy. So with that being said Laff Records has put together a powerful box set featuring a who’s who of edgy, honest and real comedy voices. It will leave you laughing out loud, looking at the world from a view you’ve never seen before and just simply appreciate the blue hue of comedy like never before. Are these comedians dirty?

Yes! Do they push the boundaries? Yes! They also give you insight to the working class man and woman, the edgy side of life that we never saw on television. They performed without a filter, hitting it hard from a real place. When I think about my family that I discovered all had these records. It was an underground phenomenon that brought laughter and love into the households. It is at a time in history when we didn’t see ourselves in the movies or in television. It gave us an option that would truly entertain that every man that wanted to be a little naughty and these party records also served a purpose of reliving stress. As these voices were heard during the politically charged times of the 50’s and the 60’s with segregation and the civil rights movement at the forefront of everyone’s brain and these edgy party records allowing people of color to release their stress. I celebrate these comedians because I believe that comedy possess a healing power. And these ladies and gentlemen truly delivered some crazy powerful medicine that touched the Black working class and helped them get to tough times.

Redd Foxx “I Ain’t Lied Yet”