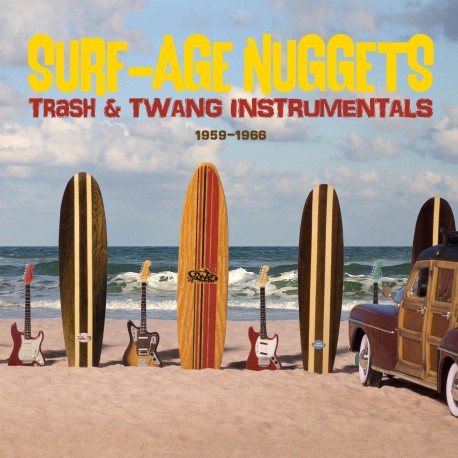 Surf Age Nuggets traces the “ethos” and attitude of surf music from 1959 to its monophonic demise in 1966. From long boards and short hair to short boards and long hair, this collection celebrates the lesser-known bands. They pioneered the sound. Raunchy, trashy and twangy, they deserve their place in Rock history. Available on CD.

• THE EMOTIONALS Miserlou
• THE REVELAIRS The Cruel Sea
• THE SAFARIS Kick Out
• THE VELVETONES Mr. X
• ROBIN AND THE 3 HOODS The Marauder
• THE VIBRANTS The Breeze & I
• THE RICK-A-SHAYS Turn On
• THE TRAVELERS Windy & Warm
• THE VULCANES Cozimotto
• KING ROCK & THE KNIGHTS Scandal

• THE FROGMEN Beware Below
• THE HOLLYWOOD SURFERS King Of The Stomp
• THE CHARADES BAND Sophia
• CALVIN COOL El Tecolote
• DAVE AND THE CUSTOMS Ali Baba
• JIM HEAD and his DEL RAY’S Harem Bells
• THE FUGITIVES The Fugitive
• THE TORQUAYS The Other Side
• 14. THE TURKS Baja
• ST. JOHN & THE CARDINALS The Rise

Fender twang, drenched in reverb like the sound of a crashing pacific wave.....a frenetic beat played with adolescent abandon.....full of hope, excitement, mystery and a little danger. Surf music is instantly identifiable, a genre that requires only a couple of guitars, bass and drums and desire.
My first exposure to this sound was on top 40 radio in the 60s. Walk Don’t Run by the Ventures.....Wipeout and Pipeline by the Surfaris....and Miserlou by Dick Dale. These bands and a few others were fortunate enough to break through commercially out of the west coast culture. In some ways this culture has similarities to the punk culture of the late 70s. You could start a band with limited technical know-how and get gigs. The formula is simple.....a rocking beat, a rythmn guitar plunking on the low strings, a bass pumping eight notes, and a lead guitar stinging on top with attitude and melody and of course a healthy dose of reverb. You didn’t need a vocalist, you didn’t really need a PA system. Your sound was self contained just by setting up close together and wailing. The first time I ever got together with a few buddies in a garage and played....I’m sure we started with something like Wipeout.
This music is thrilliing to play. It definitely gets your adrenalin pumping.
Before long everyone is looking at each other with joy and smiling “We can do this!!” There is something about the Fender gear also. A Stratocaster or Jaguar plugged straight in to a Fender amp with the reverb turned up just makes “ that sound”. Hearing that music in Florida, where i grew up, transported me to a dream world of fast cars, sunshine and of course surfer girls in a land far away in California or Hawaii. It was intoxicating and exciting. As i was learning to play guitar I searched for other bands that you couldn’t hear on top 40 radio. What you hear on this compilation are many bands that were under the radar, but still making vital music as if their lives depended on it. Even their band names are inspired.....The Vibrants, the Reekers, the Furys, The Runabouts......you can tell these guys were fired up and committed.
There is something about surf music that gets your heart beating faster.....and it still affects me this way all these years later. I hope you enjoy discovering this music as much as I have. Maybe it will inspire you to start a band... like it did for me.
Rock on,
—Mike Campbell
(Tom Petty and the Heartbreaers)

I have been a fan of surf music since the get-go. The excitement of that first wave of surf culture, the Hollywood movies that got it all wrong but made it seem so right, the surf lingo that I don’t think anybody used except Hollywood screenwriters ‘’Hey some HODADS got the Big Kahuna and they’re heading for a cruncher!’’ In all the time I spent in the surf I don’t think I ever heard anybody talk that way, but Im still hoping. This surf music brings me back immediately to the time when surfboards were the size of a small freighter and the line up was empty. I am a big fan of the twang and the reverb and the energy of it all. I don’t think I ever played an amp that didn’t have spring reverb, because how could you slide down the strings and sound like Dick Dale without reverb? Turn it up loud enough and this record can start a swell...and in an emergency the CD itself can be turned into a spare skeg.
—Chris Isaak
SURF-AGE POP CULTURE