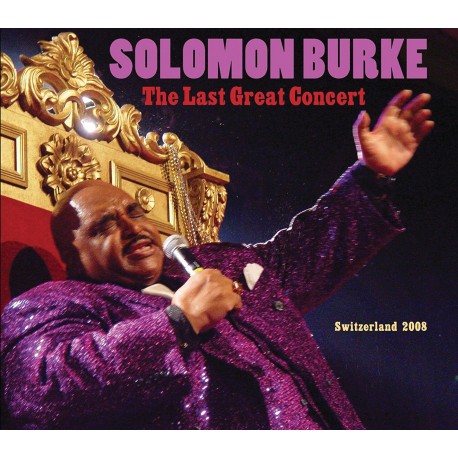 This wasnâ€™t Solomon Burkeâ€™s last concert but it certainly was one of his very best. Solomon was a veteran of the live circuit, from promoting his first recording on Apollo Records in 1956 until the end of his life.  On this night he showed that the old fire in his soul had not diminished.

If the expression larger than life (both literally & figuratively) were designated to describe only one human being, that person would have to be Solomon Burke. This incredible previously unreleased live recording is testament to that fact. Solomon always wanted to present the full soul experience in concert and he never compromised on the size of his band, which could sometimes total up to 21 people. Solomon was a class act. He had a lot of pride and the show had to be complete. His strong work ethic is omnipresent on Solomon Burke – The Last Great Concert.

One of the most striking things about Solomon was his size. Toward the end of his life, he weighed over 400 lbs. and was confined to a wheel chair. Despite those challenges, his lack of mobility didn’t prevent him from being a commanding presence on stage, singing from a king size throne. He had monumental energy and according to one his closest friends, filmmaker Alan Swyer, he didn’t need much sleep. Another one of his insights into this legend was that Solomon was not comfortable in private and that he really came alive on stage. “Plus, he loved to work. When you have 21 kids yours bills are huge,” said Swyer. Solomon was a benefactor for numerous indviduals, and he also had a huge entourage in both the secular and church world, which relied on his financial support.

“Solomon loved to give, but he also loved to get,” according to Swyer. Atlantic Records Executive, Jerry Wexler, regarded Solomon as both the world’s greatest vocalist and the world’s greatest hustler. Swyer doesn’t deny the validity of classifying Solomon as a hustler, but he is quick to point out the amazing acts of generosity and thought-fulness he performed throughout his life. While hanging out at Solomon’s house, Swyer witnessed his unconventional business side. Someone phoned and asked Solomon if he was available for a gig and the booker was instructed to call his manager, Mr. Shapiro. Except there was no such person and the number was actually a second line into the house. The concert promoter immediately calls back and Solomon answers the phone disguising his voice pretending to be the fictitious Mr. Shapiro!

“What people don’t realize is that the term soul music was coined for Solomon,” said Swyer. “If you think back to the old record store days, everything had to be in a category and what Solomon was singing was known as Rhythm and Blues. He was a minister, and in the black church, R&B was known as the devil’s music. It was secular music with an evil connotation. Solomon said it would offend the members of his church and he told that to Atlantic’s Jerry Wexler. Wexler, (who had previously coined the term R&B), can also take credit with minting the name of this new musical genre, soul music. Solomon became known as “The King Of Rock and Soul.”

Despite being heralded as one of the architects of soul music, for whatever reason Solomon never broke through like his peers Otis Redding, Wilson Picket, Sam Cooke and Jackie Wilson. Oddly, he was considered a southern soul artist and not a crossover act, even though he was born in Philadelphia. “Even with the success of his early hit “Cry To Me,” he never became a household name the way that he felt he deserved,” said Swyer. The Rolling Stones covered not only that song, but also another Burke selection, “Everybody Needs Someone To Love.” Both were recorded early in their career, making them some of the first people to make note of his brilliance.

Recognition finally came for Solomon much later in life with his 2001 induction into the Rock And Roll Hall of Fame. Then, in 2003, he also won a Grammy Award for his comeback release, Don’t Give Up On Me in the Best Blues Album Category, that featured material written by such heavyweights as Tom Waits, Van Morrison, Brian Wilson, Elvis Costello, Bob Dylan, Nick Lowe, Dan Penn and others. This critically acclaimed best seller catapulted the demand for new music by Solomon. He recorded three excellent releases for the Shout Factory label, Make Do With What You Got (2005), Nashville (2006) and Like A Fire (2008), which marks the time period from which this live recording was preserved. Solomon’s execution and delivery here exemplify how his amazing powers remained intact throughout his life.

One of Solomon’s final recordings was his 2010 self-released album, the aptly titled Nothing Is Impossible, produced by the legendary Willie Mitchell. It was during the making of that album that due to a mutual friend’s referral, I had the distinct, albeit brief, honor of working for Solomon doing publicity and promotion. A few other friends advised me to not take the job based on some of Solomon’s previous entrepreneurial antics, which at times could be classified as, let’s just say, unorthodox. I figured I could handle it because I had some experience dealing with complicated musicians. I used to engineer a weekly radio show for a famous blues musician that continually put me in the hot seat every week. It was an ongoing trial by fire, but out of respect I continued my involvement. That was a volunteer position and my monetary compensation with Solomon wasn’t much higher, but I didn’t care because it was an opportunity to interact with one of my musical heroes. I was under the assumption that Solomon wanted me to haggle for a better wage, because if I didn’t, he would think less of me. Except when I tried negotiating the salary, Solomon put an end to the bargaining when he said, “Baby, I can pay you 20...,”(pause), “Yeah baby, I can pay you $20,000.00, but baby, do you want the check to bounce?”

I was assigned some near impossible tasks, but I was willing to accept the challenge. One statement he made that day has always stuck in my mind. He commented on how he would be able to get so much more done if he weighed as little as me. It always made me feel sad for him. Ironically, he got more things done than most people, myself included . Solomon’s brain was continuously working and for the next couple of days he kept coming up with new ideas. It was impossible for him stay on track with one game plan. He got upset with me when I started questioning his frequent change of direction. It became apparent that maybe I wasn’t cut out for these sorts of interactions. The last thing I wanted was to get in an argument with Solomon. I eventually resigned.

Solomon was a multifaceted individual, who pursued many professions in his lifetime. He was both an archbishop at The United House Of Prayer and a licensed mortician. His proudest achievement was the many religious leaders for whom he played, including several Popes. Solomon also performed for political leaders, and in contrast to some other entertainers, he wouldn’t tour South Africa. “He even turned down some hits, because he felt that the lyrics could be interpreted as being derogatory in nature,” said Swyer. One of the songs he passed on was “A Little Bit Of Soap,” which became a huge hit for the Jarmels. Swyer added, “Solomon didn’t want to open the suggestion that black people are in need of soap, even though he knew that was not what the lyrics were about.” Solomon was also a strong believer in giving back to the community and he would counsel people who had become imprisoned. On several occasions, Swyer was asked to accompany him on these trips.

Modern day soul artist Eli “Paperboy” Reed recalls growing up to his father’s copy of the 1963 Atlantic LP, King Solomon, playing it repeatedly until he knew every song by heart. “I was an emotional kid and the way Solomon sang about love and heartbreak affected me like nothing I had ever heard before. He had this way of bringing you into a song, especially a ballad, bear-hugging you with his deep, melismatic voice. For a teenager that was unlucky in love, these songs were companions; they gave me a reason to keep trying.” It wasn’t until 2000 that Reed finally got to witness Solomon in concert at New York’s Central Park and he more than lived up to his expectations. Reed further added, “He was Sam Cooke, Jackie Wilson, Otis Redding, Little Willie John and Solomon Burke all rolled into one.”

The King of Rock and Soul passed away from natural causes on October 10, 2010 at Amersterdam’s Schiphol Airport, scheduled to play a sellout show a few days later. He was only 70 years old, but he accomplished so much in his lifetime and his music will always remain relevant and continue to influence future generations. The concert presented here, was recorded in Sweden in 2008. The set list is comprised of some of his classic material along with newer material from his recent releases. Solomon’s top-notch touring band and its incredible players, features Rudy Copeland on the Hammond B3 and lead guitar player, Sam Mayfield, and includes family members/back up singers Sophia Burke Perez and Candy Burke, who gets to solo on one number. As the show comes to a climax, you can envision Solomon bringing out his trademark roses for the ladies.
As evidenced by this release, Solomon never delivered anything less than an amazing performance on stage.