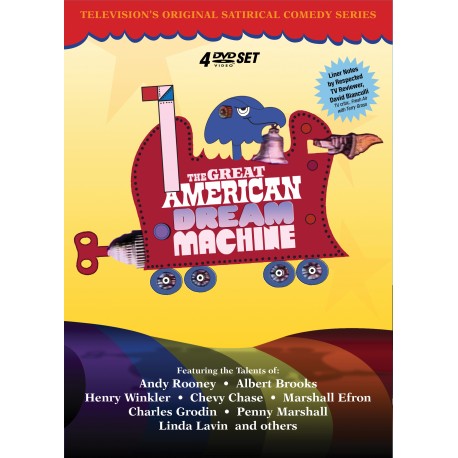 “The Dream Machine was born at a time in public television when producers were encouraged to explore new ways to use the medium – to be spontaneous – to stun, to shock, to amuse, to annoy, to anger. It was a time when producers were constrained by neither sponsor concerns nor government pressures."
—Alvin Perlmutter (Co-Executive Producer)

Over 12  hours of groundbreaking comedy, music and politics featuring two complete “best of” compilations and more than 90 additional sketches.

Broadcast on public television from 1971 to 1973, The Great American Dream Machine was television’s original satirical variety series. Unlike anything seen on public television before, the often controversial show made its mark across two highly successful seasons as a spirited magazine combining disparate elements such as animation, drama, musical performances, documentary and political commentary in an “experimental” format; commentators dubbed it the intellectual Laugh In.

And whether it’s the sketch “Albert Brooks Famous School for Comedians,” Studs Terkel’s “every man (and woman)” discussions, Marshall Efron’s comical look at gender roles, prescription drugs and food additives, or Evil Knievel expounding his life philosophy, The Great American Dream Machine mirrored what average Americans were thinking and feeling in the early ’70s amid the Vietnam war, a fading Hippie movement, and a population wrestling with issues like environmental protection and food safety.

Though it featured an astounding cast of actors, comedians and contributors who’d go on to far greater fame—including Chevy Chase, Albert Brooks, Charles Grodin, Penny Marshall, Martin Mull, Henry Winkler, Andy Rooney and many others—its only lasted for two seasons, in part due to attacks from the conservative right. However, today, the show’s DNA can be seen in every satirical TV series that followed—from Saturday Night Live and SCTV to The Daily Show.