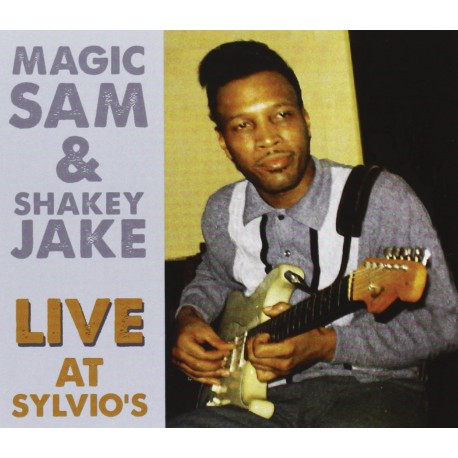 The king of West Side (Chicago) blues guitar was a young gent named Sam Maghett. You probably know him by his singular stage name: Magic Sam.

A fresh, exciting, thoroughly electrified guitar sound exploded across Chicago’s West Side during the late 1950s. Future legends pushed the stylistic envelope, taking the ensemble approach perfected by Muddy Waters and Howlin’ Wolf and adding their blazing lead guitar solos to the mix, modernizing the idiom in the process. String-bending giants Freddy King and Otis Rush were driving forces (Otis was as much a South Side staple as he was on the West).

But the king of West Side blues guitar was a young gent named Sam Maghett. You probably know him by his singular stage name: Magic Sam. His style was all his own, laced with vibrato and rapid-fire barrages of bent notes, His soul-steeped vocal delivery was every bit as distinctive as his fretwork. Sam was the total package when he stepped into the studio in 1957 for Eli Toscano’s Cobra Records on West Roosevelt Road and busted out with his sizzling debut platter “All Your Love,” constructed around a melody he would revisit often.

Born February 14, 1937 outside of Grenada, Mississippi, Sam starred out plucking a diddley bow and progressed from there. Plowing the fields was a distant memory once Sam moved north to Chicago in 1950. Before long, he met like-minded brothers Sylvester and Mack Thompson, young Mississippi emigres themselves. They proved satisfying musical associates,“He kind of went wild when me and Mack came,” says Syl, whose surname would change to Johnson (R&B stardom would eventually embrace him). “My mama got me an lamp and a guitar. We put that amp in the window; and (they) called the police many a night!” Before long, Sands uncle, harpist James “Shakey Jake” Harris, joined in the fun.

By the time Sam snared a gig at the 708 Club on the city’s South Side billed as Good Rocking Sam, The young guitarist’s stylistic vision was brilliantly developed. Otis Rush helped hook him up with Cobra Records. “I met Sam after I did `I Can’t Quit You Baby,”’ says Rush. “He was trying to get with a recording. I turned him on to Cobra.” Mack Thompson, Sam’s trusty electric bassist, dreamed up his magical sobriquet as a derivation of Maghett. No Chicago bluesman boasted a more distinctive moniker. The melody of “All Your Love” had a distinct precedent: Lowell Fulson’s ’56 Checker recording of “It’s Your Fault Baby.” “Sam told me that’s where he got it from,” says Syl.

After four Cobra releases brought Sam into 1958, the Army came calling. Finally back on his beloved West Side, Sam picked up the pieces of his career. Signing with Mel London’s Chief label in 1960, one of his instrumental platters, “Do The Camel Walk,” was a kissin’ cousin to Freddy King’s smash instrumental “Hide Away.” Neither one of them created it; slide specialist Hound Dog Taylor originated the melody.

Recording opportunities grew scarce for Sam after Chief, other than some Willie Dixon-produced 1963-64 sides that wound up on a German imprint and a ’66 single on veteran deejay Al Benson’s Crash label. But Sam remained it regular headliner at West Side joints like Mel’s Hideaway Lounge (the inspiration for the title of Freddy’s hit), later renamed the Alex Club, and Sylvio’s, a longtime blues landmark on West Lake Street when the bulk of these live record­ings were captured on tape. They were the work of Belgian blues enthusiast George Adins, who had the foresight to tote a portable tape recorder whenever he journeyed over to the U.S. to soak up more nourishing live blues in the smoky, intimate clubs where it flourished.

The precise date when Adins caught Sam on tape at Sylvio’s has been in question over the years; December of 1966, as cited in one reliable source, seems realistic. Mack Thompson remained Sam’s right-hand man on bass. Odle Payne, Jr., Elmore James’ longtime drummer, was Mack’s partner in the rhythm section. Shakey Jake was on hand to share the vocal load and blow some harmonica.

Jake opens this set by blowing up a storm on “Juke,” harp genius Little Walter’s first instru­mental smash in 1952. Then he makes way for the evening’s star. We’ve already established Sam was a Fulson fan; he does a fine job on the Oklahoma-born guitarist’s ‘54 classic “Reconsider Baby,” blasting out barrages of reverb-laced licks. Junior Parker’s swinging “Just Like A Fish” was of fax more recent vintage, having been waxed just four months earlier.

Then it’s Sam’s turn behind the mic for a spine-chilling “I’ve Been Down So Long,” built around hit favorite “All Your Love “-derived melody. Local singer Jimmy Robins’ “I Can’t Please You” had just dented the R&B charts; Sam dearly found it to his liking, investing his vocal with an extra dollop of molten intensity. Jimmy McCraddin’s ’61 hit “Just Got To Know” was tailor-made for Sam’s muscular pipes, riding a churning slow-grind bass line. Freddy King’s houserocker “I’m Tore Down,” another strong `61 seller, paid tribute to Sam’s old West Side pal.

The mic reverts to Jake for an infectious treatment of Baton Rouge swamp bluesman Slim Harpo’s “Baby Scratch My Back,” an R&B chart-topper that year. Jake swaggers through his ominous original shuffle “Sawed Off Shotgun” before Sam expounds on Texas Telecaster master Albert Collins instrumen­tal “Backstroke.” After he offers a sparkling reprise of “All Your Love,” Jake caps the set with a steamy rendition of Muddy’s “She’s Nineteen Years Old.”

Sam was ready to make his move into the bigtime. In 1967, he cut his seminal album West Side Soul for Delmark Records, catapulting him to new heights. Sam returned to the studio the next year to wax the similarly essential Black Magic. Europe welcomed Sam during the fall of 1969 as a co-star on the barnstorming American Folk Blues Festival. That’s when the bonus tracks on this set, live renditions of “All Your Love” and “Magic Sams Boogie;” were done. Mack remained on bass; Clifton Chenier’s drummer Robert St. Julien provided the strong backbeat. There’s also an interview with Sam, who didn’t have time to grant all that many.

Sam Maghett tragically died of a heart attack on December I , 1969 at age 32. The blues world lost a fast-rising star. Chicago’s West Side was deprived of one of its favorite sons.