> The Best of Big Sandy and the Fli-Rite Boys
New 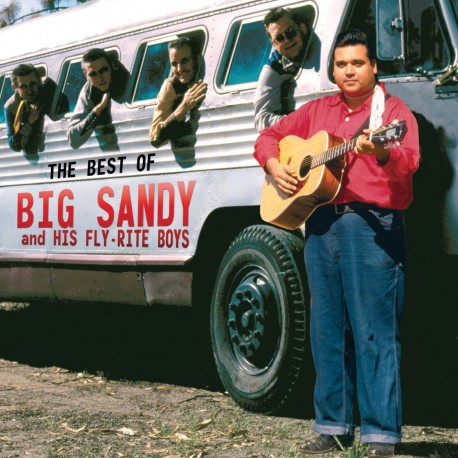 The Best of Big Sandy and the Fli-Rite Boys

There are some prime cuts from the Dave Alvin produced albums Swingin’ West and Jumpin’ From 6 to 6. Basically, it’s all killer, no filler on the Best Of Big Sandy from 1994 to 2004.

OK so, BIG SANDY & THE FLY-RITE BOYS really never had any hits. I just gotta get that one outta the way. Maybe that is part of the charm of this collection. Most of the great American music never made the charts and is waiting to be discovered. This CD is a breath of fresh smog, guaranteed to deliver a dose of nostalgia when the octane was high and polyester never existed. Big Sandy (aka Robert Williams) is as authentic as a juke joint in Texarkana in 1956, as satisfying as a Nehi Orange Soda on a summer afternoon and as fired-up as a flat head Ford. This CD features the best of their Hightone recordings, served up with that old time rock ‘n’ roll, hillbilly boogie, R&B, rockabilly/country flavor. Big Sandy has a “meat and potatoes” style of singing. He studied the greats and often sings the haywire classics such as Jumpin’ From 6 to 6 and My Sinful Days Are Over but, he throws in some solid R&B with Oochi Coochie, Have Love Will Travel, and I’m Leaving It All Up To You with Dewey Terry… Damn! Big Sandy never sticks close to home. He and the Fly-Rite Boys would tour in a big old yellow school bus (when it’s running). One kid remarked at seeing Big Yellow, ”are you guys from the past?” Well yeah!!! Didn’t he notice Rod Serling smoking a cigarette off by himself?

If you wanted to know what Rockabilly and Hillbilly Boogie sounded like in 1955, all you have to do is slap on a Big Sandy record and you are instantly transported to Southern California where you had Spade Cooley playing Western Swing and the Town Hall Party from Compton. All over the South and Southwest, that music pumped from the honky tonks and moonshine roadhouses. Those days were pretty simple as was the music. If you want to be transported in the Way Back machine, you could find dozens of bands sporting western shirts, scarf neckties, hi-rise slacks and Acme cowboy boots. It was a simple era when you had country, western and pop music. Rock ‘n’ roll was bubbling up and posing a threat to America. Somehow Big Sandy managed to absorb those roots and throw in some Bob Wills for good measure. His sound is authentic, fun, and—as Dick Clark would say, ”you can dance to it.” Someone has to keep the roots tradition alive. Good thing we have Big Sandy & The Fly-Rite Boys taking us back to yesteryear since 1988. Yeah, he’s been holding down the shack, hitting the bandstand and playing his original songs and obscure romp and stomp classics. Yep, all the ingredients are in this here CD.

Take some time to dig the past ‘cause it’s just right for the future.

If Bob Wills were here he’d say….”Aaah, take it away Sandy!”