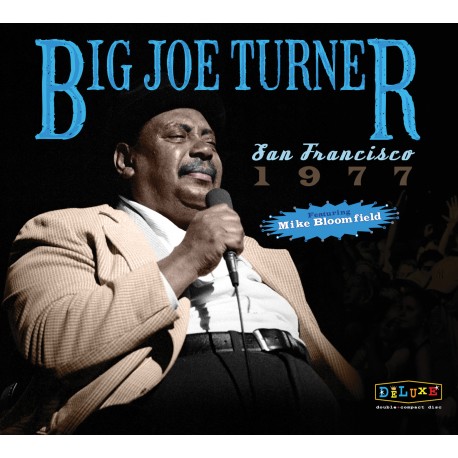 The musical godfather to every up and coming rock ’n’ roll group worldwide.

Nicknamed “Boss of the Blues” (a well-deserved accolade), “Big” Joe Turner’s musical appeal spread well beyond his Kansas City roots; he was also a highly regarded jazz singer, as well as a musical godfather to every up and coming rock ’n’ roll group worldwide.

In the 1930s Joe teamed up with fellow Kansan, pianist Pete Johnson to create some exciting blues and boogie-woogie. He was discovered in his native Kansas City by impresario and record producer extraordinaire John Hammond, who brought him to New York for a concert appearance at Carnegie Hall (and this was the 1930s) as well as a series of dates at some of New York’s most prestigious clubs. His first recordings for Decca included the classic, “Roll ‘Em Pete.”

Invited by Duke Ellington to appear in his 1941 revue entitled “Jump For Joy,” it opened the door to perform with legendary jazz musicians Art Tatum, Meade Lux Lewis, Albert Ammons and others.

By the early 1950s Joe had signed with Atlantic Records where he ushered in the rock and roll era performing such classics as “Shake, Rattle and Roll,” “Morning, Noon and Night,” “T.V. Mama” (which featured brilliant guitar legend, Elmore James), “Chains of Love,” and “Honey Hush (Hi Ho Silver)” among others. His success continued well into the 1960s with “Corrine, Corrina,” “Sweet Sue” and a new version of “Chains of Love.” During this period of great success, Joe never lost site of the jazz and blues audience that had supported him. All of the LPs he recorded for Atlantic (such as the superb and re-issued “Boss of the Blues”) featured the world’s top jazz instrumentalists.