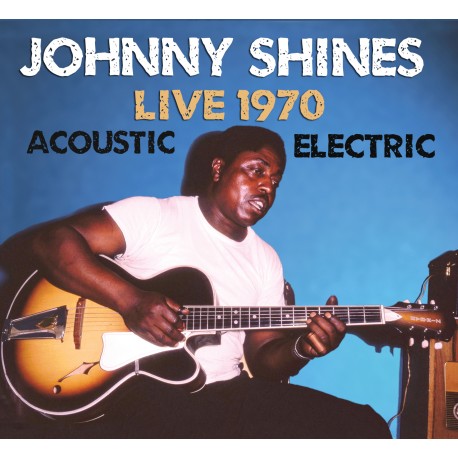 Johnny Shines learned from Robert Johnson, and then became the master himself.

I vividly recall the first time I saw the name Johnny Shines. It was November of 1964 and I had just received the latest issue of the premier blues magazine Blues Unlimited. I had been a subscriber for about 18 months, having recently discovered blues music, which was to become a lifelong passion. I devoured each issue looking for information on my favorite artists and learning about new ones. That issue’s column by Don Kent from Chicago raved about two very rare 78s he had discovered on the obscure Chicago label J.O.B. by an artist whose name was new to all of us in the blues collecting community, Johnny Shines. Three of the songs on the 78s were exceptionally fine Chicago blues but the fourth was a masterpiece: “Ramblin’,” which was an amplified update of Robert Johnson’s “Walking Blues”, with intense vocals and stellar slide guitar. It was the best interpretation of a Robert Johnson song Don had ever heard.

Even in those days Robert Johnson was considered the country bluesman without equal so we blues fans were quivering with excitement. Who was Johnny Shines? Where did he learn the song? When Chris Strachwitz reissued the 78 on a Blues Classics LP we finally got our chance to hear it. Don was right: This was indeed a masterpiece. Don had asked other blues artists about Johnny; some had heard the name but thought he was dead. Well, fortunately for us, Johnny was very much alive and not far from the blues scene. During the day he was a construction worker and, at nights, to bring in extra money, he took photographs of the patrons at local blues clubs including the club where Howling Wolf played. In the early 1930s Howling Wolf was one of the artists that impressed and inspired Johnny and he was so good at emulating Wolf’s style that he was called “Little Wolf.”

Johnny hadn’t performed for almost ten years but he still knew his stuff and in December of 1965 he recorded half a dozen sides that were part of the LP series put together by Sam Charters “Chicago! The Blues Today.” He sounded a bit rusty, but it was clear that the man who had recorded “Rambling” was everything we had hoped for.
Six months later two young English blues collectors – myself and Mike Rowe (who wrote the seminal “Chicago Breakdown”) turned up at Johnny’s door, thanks to a tip from Johnny’s old friend Walter Horton. Johnny was bemused by these two young white guys with funny accents who had traveled 3,000 miles to meet him. Johnny was a powerfully built man with muscles like a body builder, but in spite of his imposing appearance and ferocious vocal style he was soft spoken with a ready smile and twinkling eyes that hinted at the intelligence behind them.

He willingly answered our barrage of questions, thinking carefully, to make sure he was giving us accurate information and we gathered a much better picture of the man who was Johnny Shines. He was born on the outskirts of Memphis in 1915 into a musical family and started playing when he was in his teens inspired by the recordings of people like Blind Lemon Jefferson, Lonnie Johnson and Charlie Patton. Johnny met Robert Johnson in 1935 and traveled around with him for about two years – not always able to keep up with the mercurial Johnson who would be here one day and gone the next – often without any warning. He learned much from Johnson but, as throughout his musical life, was open to a wide variety of sounds.

He and Johnson parted ways in 1937 and Johnny continued traveling around and performing wherever he could. Like so many, he eventually arrived in Chicago in 1941 and immediately started performing with a small group. In spite of his Delta roots he found himself fitting in well with a more jazz based group, complete with horns. In 1946 he recorded four (never issued) songs for legendary producer Lester Melrose on behalf of Columbia Records, and four years later he recorded for Chess accompanied by Little Walter and Jimmy Rogers (also never issued). Finally in 1952-53 he recorded for J.O.B. and two 78s were issued including the magnificent “Ramblin’.” These recordings were not successful, though, possibly because of a disagreement with a powerful Chicago disc jockey. Johnny was a highly principled man, not the kind of person to let himself be told what to do. After a few more years playing around the clubs he’d had enough, sold his guitar and amplifier, and started looking for work outside music.

Around the time we met him he had recorded his first full length album for Pete Welding’s Testament label which was greeted with great acclaim. Reluctantly at first, he started touring and playing in clubs – initially in the USA and eventually around the world. In 1980 he suffered a stroke which limited his ability to play the guitar but his marvelous vocals remained intact and he continued touring and playing.

The last time I saw Johnny was around 1985 when he was touring with Robert Lockwood. I hadn’t seen him in 15 years so I assumed he might have forgotten me but as soon as my wife Nancy and I approached the stage his face lit up in a broad smile. He gave us a big hug and we pretty much picked up the conversation that we’d started in his apartment back in 1966.

Johnny died in 1992 leaving behind a memorable musical legacy and many friends around the world.

This previously unissued concert from 1970 is part of that legacy. It’s the earliest known live recording of Johnny and finds him in peak form shouting the blues as only he could and playing stellar guitar – he is featured on both acoustic and electric guitar often featuring his powerful and melodic bottleneck playing. He does half a dozen Robert Johnson songs but these are totally original interpretations by Johnny and, just as his 1952 recording of “Rambling” did, clearly showed he was the best interpreter of Johnson’s music. He also brings his individualistic approach to traditional Mississippi favorites like “Rollin’ & Tumblin” and “Pony Blues” and blues standards like “Vicksburg Blues” and “You Don’t Have To Go.” There are also a number of Johnny’s original songs including the superb “My Rat” and the risque “Hoo-Doo Snake Doctor Blues.” And whenever that voice starts soaring it never fails to send a shiver down my spine and bring a smile to my face.