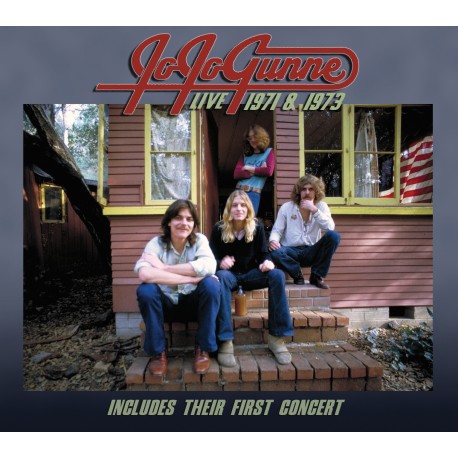 Jo Jo Gunne is certainly a quartet of amazing musicians, Jay Ferguson, Mark Andes (later replaced by Jimmy Randal), Matt Andes and Curley Smith. According to Jay, he explains how they got their name: “We opened The History Of Rock & Roll source book and we just flopped it open and ran our finger down to Chuck Berry… and there was “JO JO GUNNE.” The 1958 classic was a good handle for a band that had many musical influences as did Chuck. After the disappointing sales and reception of “The Twelve Dreams Of Dr. Sardonicus,” (now recognized as one of their best albums), Jay, Mark, left Spirit, brought in brother Matt and Texas drummer, Curly Smith teamed up to form Jo Jo Gunne. Listening to them live from 1971 to 1973, you can hear the progression of their music in this collection. Their hit “Run Run Run” in 1972 was getting a lot of airplay on FM free form rock stations. The song was pure “four-on-the-floor”Rock & Roll. The blistering slide of Matt Andes showed his skills as an adept musician. Jay on piano was the Johnny Johnson of the band, along with Mark and Curly were a very tight oufit. Fans of Spirit were expecting something similar but Jo Jo Gunne were set to move away from what they were doing just a couple of years prior in Spirit. By the time their first single was being played Mark left and was replaced by Jimmie Randall. The band released four fine albums for Asylum from 1972 – 1974. Jay had solo success with “Thunder Island” and Shakedown Cruise and scoring music for movies and TV. Mark Andes later united with Rick Roberts and Jock Bartley and formed Firefall. Later he joined the successful band Heart and played with Ian McLagan in The Bump Band.

The first disc was live at the legendary LA venue Hollywood Palladium which opened in October, 1940 featuring Tommy Dorsey and Frank Sinatra! In. Fast forward to 1971, a year before their single “Run Run Run was released this show was recorded. In the background you can hear one of the members saying “this is our first concert.” What a debut! Loud, brash and inventive. This show holds up and stands the test of time. On the second disc you will hear a radio broadcast from Long Island from Ultrasonic Studios/ WLIR.

There is precious little in the way of live Jo Jo Gunne material. We hope this fills the void and introduces you to one of the great Rock & Roll Bands….JO JO GUNNE!