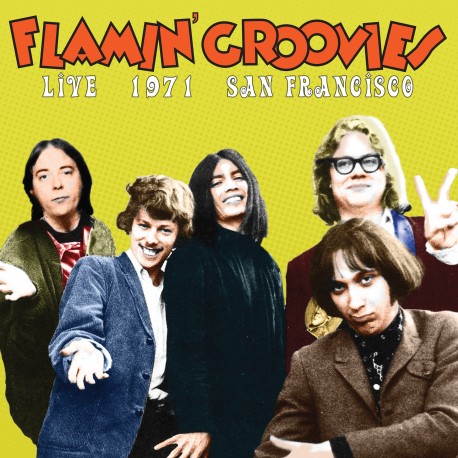 From Elton John to the Rolling Stones, the word on the Groovies was a resounding “yeah!"

It was 1971 and the Flamin’ Groovies were in a whirlwind of trouble again. They had just cut one of the most famous underground rock LPs of all time. “Teenage Head” was the name and put down was the game, but not by the press or famous rock stars but by their own label, Kama Sutra Records.

From Elton John to the Rolling Stones, the word on the Groovies was a resounding “yeah!,” but the Buddha Group, which included Kama Sutra Records, didn’t give two f**ks! No promo money, no hype! It just came out without so much as a hoot from the label, despite the fact that the rock press raved.

Then, to make matters worse, their second lead guitarist, Tim Lynch, was busted by the police and then their manager ran off without so much as a word of explanation, disappearing with all their stuff—money, posters, artwork, etc. And all of this trouble did not sit well with their leader, Roy Loney. Losing Tim Lynch was a bummer for sure and the band felt it but for Roy, it was a game ender.

Well, the closing of the Fillmore West (actually, the Carousel Ballroom) put a big dent in the City By the Bay. It was the end of an era, an era that saw one band after another take off like rockets into the big time and beyond.

The list of bands that Bill Graham didn’t want was also big, and the Groovies were on it, for years. Our first manager was Bill’s right hand man in the beginning of the Fillmore boom. He quit working for Bill to manage the Flamin’ Groovies and this did not sit well with Mr. Graham so the Groovies went up and down in Bill’s eyes. One week we sucked, the next week, he needed us to open a show because of a pull-out.

So it came as a big surprise when we found out he wanted us for this big and important event. We were thrilled, to say the least, maybe stunned is a better word.
I remember the show well. The difference in playing this gig as opposed to the Whisky-A-Go-Go in L.A. was like night and day. At the Whisky, we were the house band (two summers in a row). At the Fillmore, we were up for grabs. The staff- stage manager, sound people, ticket takers, light show? They all looked down on us. This was all done in the open, so to speak.

During the sound check, I was electrocuted, twice. It was extremely painful, bringing tears to my eyes (this happened again during the show).
I remember hanging out with the drummer and bass from Creedence Clearwater Revival. There were a lot of shows that week and I went to all of them but it was a real gas to hang with Mr. B.B. King…we had a good time together!

Oh yeah, this was our last show with my good buddy, Roy Loney.