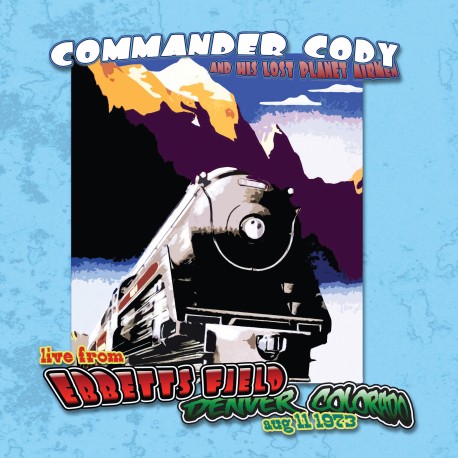 George Frayne, known to the music world as Commander Cody, is not only a world-famous rock ‘n roll star who had a #1 Pop hit in the ‘70s, several albums that hit Billboard Magazines Top 40 and was leader of a band once named the “ best live band in the world” by Billboard International; is also a renowned fine artist in painting, sculpture, and multimedia whose work has been exhibited in museums from Austin to Tokyo, the Rock and Roll Hall of Fame, and a permanent display in New York’s Museum of Modern Art.
On the road in the beginning of this long journey, Commander Cody and his Lost Planet Airmen were celebrating 1973 with a hit record – Hot Rod Lincoln_ and album, a new bus to tour in ( a 1956 Chevy Greyhound) and a new world class steel player Bobby Black, one of the greatest to ever live. On his first Commander Cody tour, Bobby was on the bus when the band hit Denver to play a club called Ebbetts Field, which was set up on the inside like a ballpark with seating up the walls, which were packed. A radio team was sent in to broadcast locally and record for posterity. This is that concert, released publicly (and legally) for the first time.

A year later Billboard Magazine voted this band to be the “best live band in the world”. You can tell here, they were on their way.