> The Mutants: Curse of the Easily Amused
New 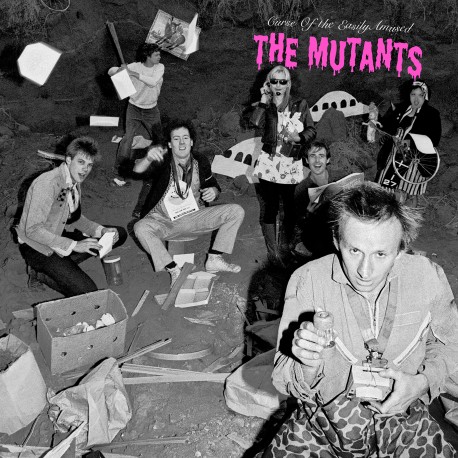 The Mutants: Curse of the Easily Amused

More than four decades after the Mutants first appeared on the San Francisco underground music scene, this new collection manages to introduce eight Mutants songs that have never appeared before on LP, CD, or cassette.

More than four decades after the Mutants first appeared on the San Francisco underground music scene, this new collection manages to introduce eight Mutants songs that have never appeared before on LP, CD, or cassette.

Each of the 14 tracks on Curse of the Easily Amused has either been remixed, or sourced from previously unreleased tapes. “From the band’s point of view, each cut is a substantially different version than what might have appeared before,” explains current Mutants bassist and project producer Peter Conheim. “The versions of “Think Think Think” and ‘“Tribute to Russ Meyer” feature radically different approaches from what was heard on the Fun Terminal reissue. Audio quality for all the tracks here is superior to anything that’s come before.”

The Mutants traveled south from San Francisco to Malibu in the fall of 1980 for a demo session with producer Paul Wexler, who was riding high on the “We Got the Beat” single he had recently cut with the Go-Go’s. Three of the Mutants’ songs recorded during that session now appear on Curse of the Easily Amused with new mixes: “Odd Man Out,” “Too Much Too Soon,” and “Love Song.”

The eight previously unissued songs on Curse of the Easily Amused arrive from various Bay Area sources. “PARTY!,” “Sofa Song,” and “W.A.S.P.” date from 1979. “Space Song” (1980) and “Noises and Numbers” (1981) are live performances recorded at the Mabuhay Lounge and the Savoy, respectively. “Modern Conversation” and “The Other Government” date from the Fun Terminal sessions,. Finally, “Missing in Action” was cut in 1985 at Different Fur.

Mutants’ guitarist John Gullak elaborated further.””David Carothers (drums), Sue White (vocals), Sally Webster (vocals) and I all met when we attended California College of Arts and Crafts in Oakland. Fritz Fox (vocals) was at San Francisco Art Institute. We were all fast friends and collaborated on various art projects, performances, videos, and parties.

“In 1977, David and myself had a big party at the warehouse studio we had just moved into in West Oakland. David, Sue, Sally, Fritz, and I decided we should start a band. Jeff Brogan, the original bass player, came up with our band name before he left the group due to personal matters. Sue and Sally knew Brendan Earley (guitar) from work and recruited him and Charlie Hagan took over bass.”

In his 2021 book, Disturbing the Peace: 415 Records and the Rise of New Wave, Bill Kopp writes, “Perhaps more than any other band in the Bay Area punk and new wave scenes, the Mutants embodied the art school aesthetic… but the Mutants were the artiest of them all.”