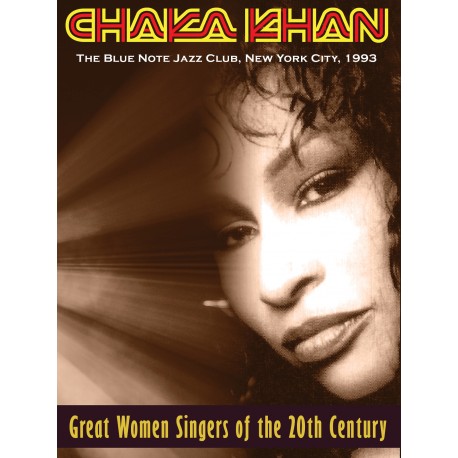 This is a unique, rare, and exciting live performance recorded at the peak of Chaka Khan's vocal prowess.

Chaka Khan has been performing for almost 50 years. The multi-platinum, Grammy Award®-winning singer began her career in the early 1970’s with the preeminent funk group, Rufus. A beautiful and dynamic vocalist, Chaka was raised on Chicago’s South Side. She began her career as a solo artist, singing jazz. Her fame, however, came with contemporary solo funk hits like “I Feel For You” and the classic “I’m Every Woman,” which she recorded 10 years before Whitney Houston’s cover version.

This 1993 live performance at New York’s intimate jazz club, The Blue Note, finds Chaka in the musical environment that she has always felt most creative. In great voice and surrounded by five great players, she performs a rare catalog of songs closely associated with jazz, several of which cannot be found on her other recordings. She sings the Ellington/Strayhorn “Take The ‘A’ Train,” Rodgers and Hart’s “My Funny Valentine,” plus “Summertime” and “I Loves You Porgy” from Gershwin’s folk opera “Porgy and Bess.”

This is a unique, rare, and exciting live performance recorded at the peak of her vocal prowess. Her definitive vocal talent, seen live, offers a great “ENCORE” concert performance.