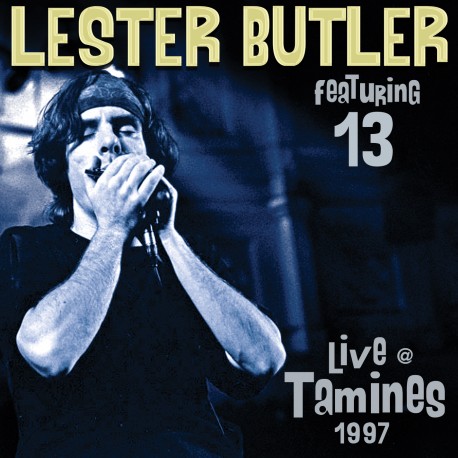 This concert was 13’s first European tour and recorded a year before Lester died.

There was a moment in Rock history when Cream recorded “Crossroads” and changed how we heard the Blues. The British power trio blended a rock attitude while maintaining the integrity of Robert Johnson’s Delta classic, broadening the appeal of the Blues to white audiences. In his short life, Lester Butler was able to shape his sound by bringing the blues harp more up front and… not take a back seat to the lead guitar. His combination of attitude, songwriting, performance electrified audiences with the intensity of his playing. Sad that Lester will most likely remain a cult figure, appreciated by a loyal following for his work with The Red Devils and on this his expanded album titled 13 from 1997.

Lester was born In Virginia but spent time as growing up skateboarding and surfing in Southern California. Somehow he managed to absorb and learn the “chops” that made Howlin’ Wolf, Billy Boy Arnold, Little Walter and Paul Butterfied so influential. The previous incarnation of bands were The Blue Shadows who changed their name to The Red Devils, recording a heart pounding blues CD in 1992 produced by Rick Rubin Live At The King King. After the band broke up, Lester formed the group 13 and continued the blues tradition with that band which included Alex Schultz and Smokey Hormel on guitars, Steven Hodges and Johnny Morgan on drums, Andy Kaulkin on piano and James Moore, Tom Levy and James Intveld all playing bass on various tracks. In an interview, Lester proclaimed that the number 13 was his lucky number even though it spelled bad luck for others

In some ways the recordings with the Red Devils and 13 are stylistically similar. Without drawing comparisons between the two, let’s say the two aggregations accomplished what The Fabulous Thunderbirds had done in the 1980s…bringing the blues to a predominately white audience with respect for the genre. Very few white blues bands have been able to take the blues to a new level without sounding well….”white.” Lester Butler seemed to understand the blues structure but as Clapton did with the electric guitar, Butler did it on the amplified harmonica. His solos were extended punctuated by a voice that was not just distinctive but appealed to young audiences with an edge and attitude. The music of 13 featuring Lester Butler appealed to younger, rock audiences. But….if you listen carefully to his playing you hear the passion and love for the Blues. The whooping and wailing is often reminiscent to another, obscure harmonica Bluess master, Papa Lightfoot who supplanted the guitar as a lead instrument. Butler worked with some great musicians, Bill Bateman, Jonny Ray and Dave Lee Bartel in the Red Devils. In both bands, Lester was clearly the star but he had yeoman support with a back beat that propelled his sound to a fever pitch intensity. included in this re-issue you will hear Eddie Clark on drums and Mike Hightower on bass.

To this day Lester continues to have a devoted following in The Netherlands. It was there where Butler gained the majority of his fans and where there is a Lester Butler tribute band. The death of Lester Butler on May 10th 1998 was tragic. The cause of death was determined as lethal combination of heroin and cocaine. Two of his friends were convicted of involuntary manslaughter in the complicit act of administering drugs to Lester. He died in a van in a parking lot while his band mates played the gig without him, not knowing his ultimate fate only a few hundred feet away. There isn’t a moment when his band and fans don’t think about what a loss there was in Lester Butler. Truly a rising star that lived fast, loved hard, and died way too young.

This concert was 13’s first European tour and recorded a year before Lester died. It was on the promotional tour for the CD originally on Hightone…. Lester and 13 were on fire at The Tamines Festival in Belgium 1997. This is the best example of the intensity and fervor with which Lester played his music. This may have been one his finest moments live and certainly stands up there with the great work he did with The Red Devils.