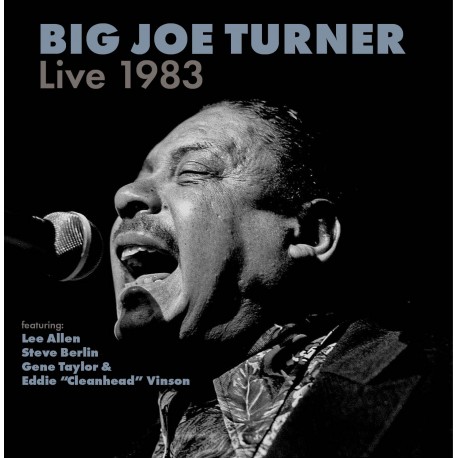 Big Joe Turner was certainly a legend. He was a “blues shouter.” Joe pioneered rhythm & blues in the 1930s when he sang at the From Spirituals To Swing concert in New York at Carnegie Hall in 1938 where he sang with “Roll ‘Em Pete” with the legendary boo­gie woogie pianist Pete Johnson. According to Doc Pomus “Rock & Roll would have never happened without him. Doc was a life long friend of both Joe and his wife Pat Turner. Joe was influential in the R&B field. He reached the peak of his popularity in the 1950s at Atlantic Records under the helm and direction of Ahmet Ertegun. In total he had 20 hits on the R&B charts. Joe practically invented “jump blues.” His most popular hit, “Shake Rattle & Roll,” was used for an Apple iPod commercial in April of 2012. In 1987, Big Joe Turner was inducted into the Rock & Roll Hall Of Fame.

A few years earlier in 1983, The Music Machine was a hot spot in Santa Monica for live music. A lot of great acts rolled through there in the 1980s. There was quite a scene going on away from the Sunset Strip with clubs offering, New Wave, Punk, Blues, Rocka­billy and even Country. Legends such as Charlie Feathers made it to the West Coast to play in South­ern California. It was hard to de­scribe. You knew that these great singers and musicians were get­ting on in years but no one wanted to entertain the thought that one day they might be gone. It was truly the end of a great era. On a nice Fall day in October, 1983, Big Joe Turner took the stage at The Music Machine. Keep in mind that Joe had also recently played with The Blasters at Club Lingerie in West Hollywood earlier that month. It was a real treat to see him back again with Lee Allen leading the band featuring Eddie “Cleanhead” Vinson and Steve Berlin, backed up by some great musicians including Gene Taylor. Gene, Steve and Lee were in the band with the Blasters dur­ing that time, knocking out some of their best material. It was their peak. This night Joe held the stage and delivered his usual powerful vocals. It could be said that Joe could sing without a microphone, so he often was a little “off mike” as he could over modulate very easily. His wife Pat adored Big Joe. She from Oklahoma, would always be at his side until the very end three years later. Joe would often yell “PATRICIA!!!” even from the stage when he needed her. This night all he needed was the de­voted musicians who backed him up. In the audience that night was Percy and Tina Mayfield. Pat in­vited me to sit at their table. We watched Joe sing for over an hour. Due to the onset of diabetes, Joe could only sit. His legs were giving out and this was his last hurrah. We all suspected it. I remember going to Joe’s house a year later when he became bed ridden and later in the hospital I thanked him for all the great music he gave us. He had a big heart, big voice and played some mighty big blues in his day. He truly was “The Boss Of The Blues.” In 1985 we laid him to rest. The great blues shouter had finally passed on. Myself, Lee Allen and four other gentlemen were pallbearers. At the service, my dear friend Ahmet Ertegun sat behind me. We all knew what we lost. As I watched his casket low­ered into the grave, I shook Lee Allen’s hand and said that we lost a great friend and a pioneer in rhythm & blues. Lee would pass on in 1994. America is so rich with music legends past and pres­ent. Here is one of them ... Big Joe Turner ...