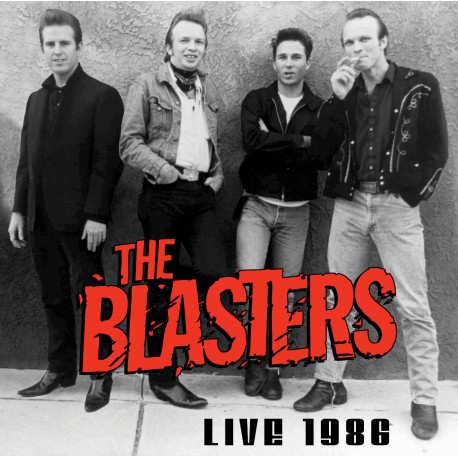 Dave and Phil Alvin, John Bazz and Bill Bateman were a brash quartet who absorbed the roots of American music. Available on LP and CD.

The Blasters are the pride of Downey, California and formed as a band in 1979, taking their name (in part) from Jimmy McCracklin and The Blues Blasters. It was with their Rollin’ Rock album of the same year that they received critical attention as a live band during the waning days of the Punk Rock movement. Dave and Phil Alvin, John Bazz and Bill Bateman were a brash quartet who absorbed the roots of American music seeing Big Joe Turner play LA as well as Eddie “Cleanhead” Vinson and other blues and R&B acts who passed through on tour in the mid 1970s. Pretty amazing for a couple of kids who were barely out of their teens. Their main haunt was the Ash Grove on Melrose Ave. in West Hollywood. They saw an amazing array of Blues, R&B and Country performers take the stage at the now legendary club. After their first album was released, The Blasters played extensively in Southern California, gaining a reputation as a rock-hard roots band that didn’t fall into the trappings of being “revival.” Sure they played obscure nuggets such as The Rockin R’s “Crazy Baby,” and Little Walter’s “Off The Wall,” as well as other lost treasures. They found these 45s at Wenzel’s Music Town gladly spinning them for anyone willing to listen. Hey, they still had that love for the snap and crackle of an old 78! Dave was developing a knack writing songs that tapped into the deep well of the lost America. By the early 1980s, Dave continued his songwriting. “Marie Marie,” “Border Radio,” “I Don’t Want To,” “Long White Cadillac” and others flush with the sentiment of R&B, Blues, Country and Folk followed. They double billed with some great artists such as Rockpile and The Fabulous Thunderbirds, playing not just L.A., but all over the world including Italy and Germany. The quartet broadened it’s line up and included Steve Berlin, Gene Taylor and New Orleans sax ace, Lee Allen. The roots rock scene in L.A. was exploding at The Whiskey A-Go Go, Club Lingerie, The Country Club and Madam Wong’s, to name a few. Phil sang, Dave thrashed Rockabilly, Blues and R&B licks over the pounding backbeat of Bateman on drums and Bazz on bass. At one point they even headlined the Universal Ampitheatre in August of 1982. This was a far cry from one of their early shows at The Topanga Corral with a dozen people in the audience in 1980. In two short years the band exploded and appeared on national television in 1981 on a short lived show called Fridays. One personal high point was in 1983 when the backed up their idol, Big Joe Turner at The Club Lingerie. Sadly, Joe passed away two years later.
The Blasters were lauded by the critics and developed a loyal following. The intensity of their live shows continued to build. Phil drenched in sweat, Dave wailing on the guitar while Bazz and Bateman were pushing the rhythm into overdrive. With all that energy and talent, the Blasters never resorted to histrionics. That in it self added to their appeal and authenticity. There were plenty of bands doing acrobatics on stage. The Blasters always played it cool. As time went by the roots rock scene had waned. Dave joined X and wanted to branch out record solo albums. In 1986, Dave was playing his final shows with the original Blasters line-up. Gene Taylor was gone, Steve Berlin was playing with Los Lobos and Lee Allen was honking the sax on tour with Fats Domino. This takes us up to February 14, 1986 at The Coach House in San Juan Capistrano where this show was recorded. Stripped down, back to the original quartet and playing like it was 1980 or maybe better! They did two shows that night. At this point they had some amazing, original compositions under their belt. All the Blasters chestnuts are here making this a memorable show and in many ways one of their best. Phil is in great voice and Dave on top of his game on guitar and doing double duty in the same year playing for X. The Blasters at The Coach House is one outstanding show as it was one of the last gigs the Alvin brothers would play together in the 1980s. Phil has continued to tour as The Blasters and released two solo albums. Dave continues to record solo albums and continues to tour with critical acclaim. And... He won a Grammy in 2001. Occasionally Dave has reunited with the band at special gigs as he did in 2004 at The House Of Blues on the DVD The Blasters Live: Going Home. Phil, Bazz and Bateman still hold down the fort with The Blasters releasing their last record in 4 11 44 in 2004.
This show was an end of an era, but it sounds like it just began.