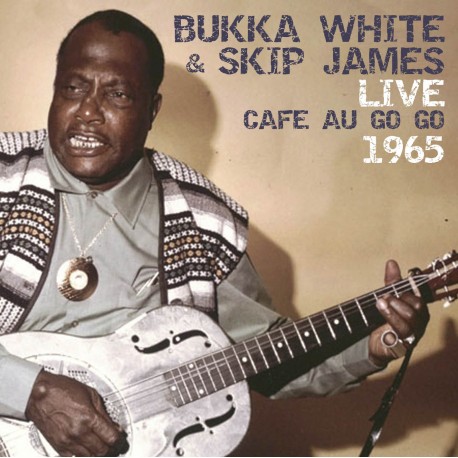 The two artists on this set have a surprising number of things in common. Both men recorded in the first wave of pre-War blues, both then disappeared from the recording studio for several decades (during this hiatus one would join the ministry and the other would go to prison for assault!), and both were rediscovered by young white blues fans and had second recording and performing careers during the 1960s and 1970s. Each had at least one of his songs covered by popular white artists, and neither made much money during their lifetimes. And both, as can be heard on these recordings, performed at New York’s famed Cafe Au Go Go, though not together. But despite these similarities, the music they produced is very different indeed.
The Cafe Au Go Go was a Greenwich Village basement coffeehouse that opened in 1964 in the midst of the folk revival. Located on Bleecker Street, it hosted jazz, folk and blues musicians as well as comedians like Richard Pryor and Lenny Broce, who was arrested for obscenity during a performance. In addition to blues artists like Skip James and Bukka White, Big Joe Williams, John Lee Hooker, Muddy Waters, the Grateful Dead, Judy Collins, Jefferson Airplane, Joni Mitchell, Country Joe & the Fish and many other bands played there during it’s relatively short life; the club closed in 1969.
Nehemiah “Skip” James (1902-1969) was born in Bentonia, MS. A quiet, reserved, dignified man (his longtime manag­er and friend Dick Waterman refers to him as “courtly’’), James always spoke clear and perfect English, never using the street slang so common among his fellow musicians. Although it’s correct to refer to him as a Mississippi Delta bluesman, it’s important to note that that’s a geographic designation rather than a musical one: his eerie, high-pitched vocals and unique guitar style are totally unlike any other artist who came out of the Clarksdale/ TunicaMcksburg area. James first recorded for Paramount in 1931, then disappeared from the music scene (some reports say he became an ordained minister) until his rediscovery by three young white enthusiasts, John Fahey, Bill Barth and Henry Vestine. Through their efforts he appeared at the 1964 Newport Folk Festival, made several studio albums for the Vanguard label, and went on to perform at coffee houses, concert halls and colleges from 1964 until his death from cancer in 1969. His best-known song, “I’m So Glad,” was recorded by the English rock band Cream; it was probably his biggest payday, although he didn’t live long enough to realize much of the song’s income.
Booker T. Washington “Bukka” White was born in 1909 in a small town near Aberdeen, Mississippi. He played a steel-bodied National guitar in a style influenced by Charley Patton, among others, and sang in a rough-hewn baritone. Under the name Washington White he made several recordings in the early and middle 1930s (in his case for the Victor, Columbia/OKeh and Vocation labels), did a few more sessions np through 1940, and then spent a long period of time working outside the music business, including a stretch in prison. He too was rediscovered by guitarist John Fahey, who in the 1960s heard one of White’s OKeh recordings entitled “Aberdeen, Mississippi Bines.” In a wild stab at locating anyone who might have known White, Fahey wrote a letter addressed “Bukka White, Old Blues Singer, Aberdeen, Mississippi.” He was quite startled to receive a response some time later from the man himselfl Fahey’s fledg­ling Takoma label recorded an album by White, and there were also later releases on Arhoolie and a couple of live recordings. Bob Dylan waxed White’s “Feel Like I’m Fixin’ to Die” on his debut album for Columbia in 1962, and White too was part of the blues rediscovery era, playing across the country and around the world, including a tour of Europe with the 1969 American Folk Blues Festival. He died in 1977, although a couple of years prior to his actual death he was the subject of an erroneous obituary in Rolling Stone Magazine. When told of this goofhe commented, “It’s hard enough for me to get any jobs (gigs) when people think I’m alive. If they think I’m dead ain’t no damn body ever going to hire me!”