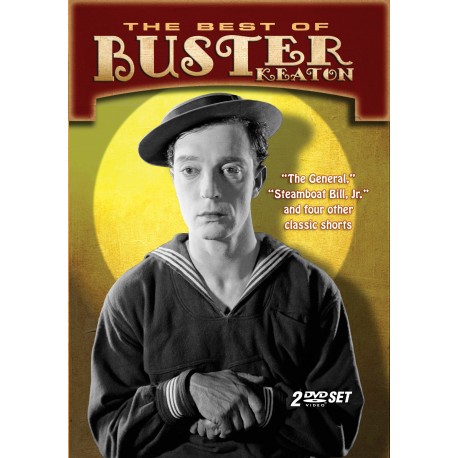 The Best of Buster Keaton

THE GENERAL
(1926)
Keaton’s world is topsy turvy when Union troops not only steal his beloved
locomotive, The General, but also kidnap his finance and take her on board.

THE GOAT
(1921)
Buster is mistaken for criminal Dead Shot Dan. He is pursued throughout the city by a local police chief, but using disguises and quick-thinking to elude the lawman.

THE BLACKSMITH
(1922)
Buster clowns around in a blacksmith’s shop until the smithy is sent to jail. He takes over and eventually destroys a Rolls Royce while fixing the car parked next to it.

STEAMBOAT BILL, JR.
(1928)
Slated to take over his father’s boat one day, Buster has conflicting feelings as his sweetheart’s father is a competitor. Includes Keaton’s most famous scenes.

COPS
(1922)
Keaton eludes police, eventually locking them in a building. When his girl shows her disapproval, he lets them out and the chase starts over again.

THE LOVE NEST
(1923)
In order to escape from his life and lost love, Keaton sets sail on his boat, Cupid, but ends up on a whaler called The Love Nest with a short tempered captain.