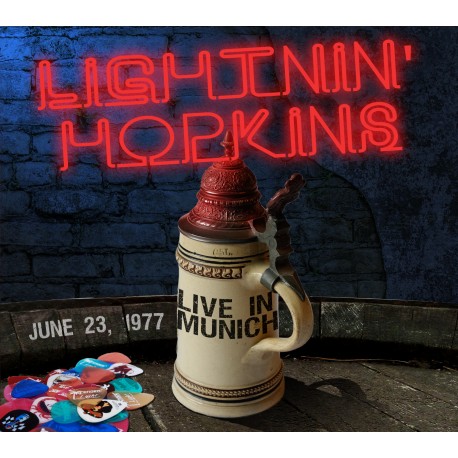 This performance by the legendary Lightnin’ Hopkins, who Rolling Stone cited as one of the 100 Greatest Guitarists of All-Time, was recorded in Munich, Germany in 1977, during one of his many tours of Europe.

Starting as an accompanist to Blind Lemon Jefferson at church events, Hopkins rarely performed outside of Texas during the ‘40s and ‘50s but on occasion, traveled for recording sessions on the East coast, mid-west and Los Angeles. Expanding his musical base, he debuted at Carnegie Hall in 1960 with folk artists Pete Seeger and Joan Baez.

While he was always a favorite and something of a spiritual leader among guitarists, he managed to record in excess of 800 songs during his career, performing with other blues and folk artists and in 1968, recorded an LP backed by the rhythm section of the 13th Floor Elevators.

As testimony to his enduring legacy, most of his prodigious studio output is still in print but there is something special about hearing Lightnin’ Hopkins live, in front of a crowd that turns on the magic and explains everything.

Turn it up and enjoy.

“one of the great country blues and perhaps the greatest single influence on rock guitar players” The New York Times obituary for Lightnin’ Hopkins.