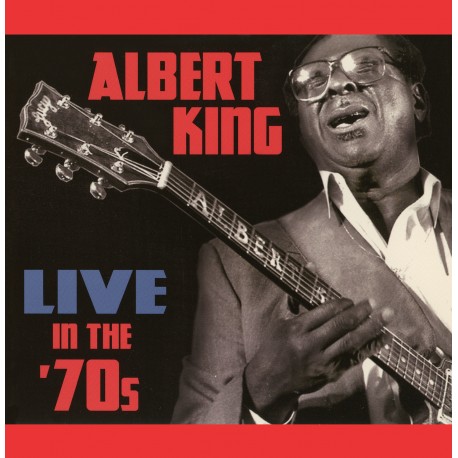 Albert King Live In The '70s

Albert King Live In The '70s is a monumental performance from one of the kings of blues guitar.

Here is yet another one of the 'Three Kings of Blues Guitar." The other players were Freddie and B.B. King. Albert had a distinctive style of playing that seemed to resonate with so many contemporary artists both black and white. His guitar of choice was the Gibson Flying V, which he named Lucy. Both he and Lonnie Mack used this guitar almost exclusively. His image was commanding but his sound was equally compelling. He influences Stevie Ray Vaughan, Mick Taylor, Eric Clapton, Mike Bloomfield and Joe Walsh to name a few. It always comes back to the Blues as being one of the major building blocks in the evolution of Rock music. In an interview with Blues Unlimited, Albert reflected, "] always did like the guitar, and before then, I got a wire from a whisk broom and used it as a guitar string. I used to listen to Lonnie Johnson, Howlin' Wolf and Dorphy Bailey, he was a terrific guitar player. He and Wolf used to run as a team, Wolf would play harp and rap on the second guitar. Dorphy was playing first guitar." His importance cannot be overstated. He was tender, funky and wrote songs that stand the test of time. His music sounds as relevant as it did in the '60s and '70s. He never lost that "edge."
Albert King Nelson came from Indianola, Mississippi where he picked cotton. Later, he moved to Gary, Indiana and to Arkansas and Missouri. He actually began singing with a gospel group, The Harmony Kings. King recorded for the Parrot label, known for their R&B and vocal group singles. He was then signed to the Bobbin label where he made his first real impact with "Don't Throw Your Love On Me So Strong." Albert used his left hand for picking strings. The power of that style got everyone's attention. His style was so intense rhat no orher player could duplicate his sound.
Albert stepped into Satellite Record Shop in Memphis and later mer Estelle Axton, a partner with Jim Srewart at Stax Records. They signed him and he cut a number of his signature songs. "Born Under A Bad Sign," "Personal Manager," "Crosscut Saw," and "Blues Power" to name a few.
In rhe late I 960s, Albert King was readily accepted by the San Francisco, hippie community. Playing at The Fillmore West exposed him up to the predominantly white record buying public. His career exploded. Albert passed away in 1992. Very few guitarists can boast such an accomplishment. He never rejected audiences or players because of their color. To him it was all the blues, no matter what your nationality. That along with his amazing repertoire is his legacy.