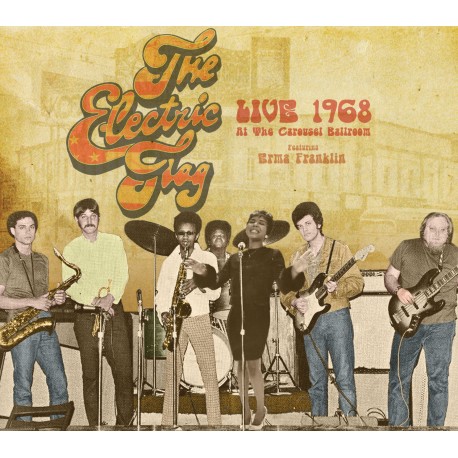 The Electric Flag, Live 1968, At The Carousel Ballroom

The Electric Flag was like that elusive dream you have where everything in the universe lines up in your favor – too good to last. They came together in 1967, when erstwhile Paul Butterfield Blues Band guitar hero Mike Bloomfield and his Butterfield buddy, organist Barry Goldberg, decided to start something new, drafting bassist Harvey Brooks, who had played with Bloomfield on Bob Dylan’s Highway 61 Revisited, 19-year-old drummer/singer Buddy Miles (then part of Wilson Pickett’s band), and singer/songwriter Nick Gravenites, who had penned tunes for Butterfield, Janis Joplin, and others. The horn section of Peter Strazza, Marcus Doubleday, and, eventually, Herb Rich completed the band’s original lineup.
The Electric Flag played an open-ended blend of blues, soul, rock, jazz, and whatever else filled their sails at the moment. Their first gig was at an event no less auspicious than the Monterey Pop Festival in June of ’67. The band’s recorded debut was the soundtrack to the Roger Corman-directed, Peter Fonda-starring LSD film The Trip, and their first “proper” LP was A Long Time Comin’. By the time it was released in early spring of 1968, the original lineup had already begun to splinter. Goldberg quit the band before the album was finished, and Bloomfield would leave in June of ’68. By ’69, the remaining members called it quits.
But on April 21, 1968, apart from baritone saxman Herb Rich moving over to organ to replace Goldberg, the original Flag was still flying. On their home turf, at San Francisco hippie haven The Carousel Ballroom, they offered up a show suggesting the myriad directions they could have gone if they’d been able to keep things together. Making the moment even more remarkable was the presence of Erma Franklin on the bill, elder sister of Aretha and a blisteringly talented – if ill-starred – soul singer who’d just scored an R&B hit with “Piece of My Heart,” soon to be covered by Janis Joplin.
Beholden to little beyond their own muse, the band basically ignored their brand new album, spending their set putting their own spin on an eclectic array of covers. They inject some Stax-style urgency into a piston-pumping take on Stevie Wonder’s “Uptight (Everything’s Alright),” which segues into a stomping, soul-soaked version of The Beatles’ “Day Tripper.” Dipping into Bloomfield’s hometown roots, the band adds some Chicago sweat to Roosevelt Sykes’s “Driving Wheel,” which had also been part of the Butterfield repertoire, and Bloomfield digs his teeth into his solo. Showing a very different shade of their palette, the Flag spends some 16 minutes on a sultry, swinging stroll through Miles Davis’s ‘50s tune “The Theme,” with the horn section earning their pay and then some. Another Chicago standard, Jimmy Oden’s archetypal slow blues burner “Going Down Slow” gives Gravenites and Bloomfield their finest moments of the night.
Franklin’s set, which featured backing by the Flag minus Bloomfield, dares us to dream about what might have been if she’d caught some better breaks in her career. Scorchingly soulful, she tears through two of her 1967 singles (“Piece of My Heart” and “Big Boss Man),” gives her sister a run for her money on a sassy cover of Aretha’s “Dr Feelgood,” charges through a medley of Marvin Gaye’s “I Heard It Through the Grapevine,” Jean Wells’ “Have a Little Mercy,” Etta James’ “Tell Mama,” and Aretha’s “Chain of Fools,” and practically leaves her spleen on the stage in a frenetic version of Sam & Dave’s “Hold On, I’m Coming.” The encore tunes “Everyday I Have the Blues” and “Killing Floor” are purported to include members of other San Francisco bands joining in with the Flag, in keeping with the freewheeling, fraternal spirit of the place and time.
Within a month, the original dream of The Electric Flag would be torn to pieces, which makes this rare peek at the band in its tauntingly brief prime all the more precious.