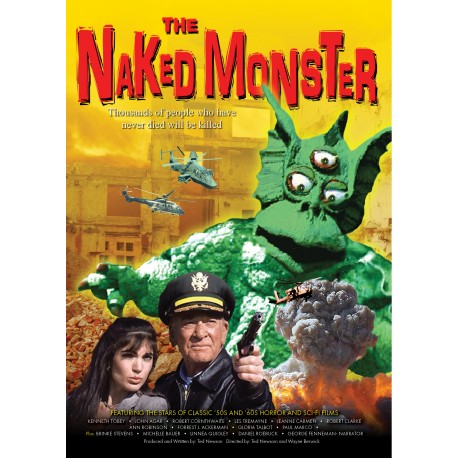 A brain-dead sheriff named Lance, a stolid FBI agent named Jeff and a “well equipped” female paleontologist team up with Colonel Patrick Hendry (Kenneth Tobey), a grumpy retired monster fighter, to battle a 60 foot, three-eyed cross between man and dinosaur. Creatively named ‘Monstersaurus Erectus,’ this could be the dumbest monster in the history of cinema.
Using soundtracks and extensive footage from numerous old films, this tribute to classic horror/sci-fi films brings back many favorite actors from these classic movies, some reprising their former roles, to help destroy a massively cheesy, atomic, stop-motion monster that stomps its way through scenes of mass destruction via extensive clips from old movies, intent on the obliteration of Los Angeles.
A direct homage to the horror/sci-fi/creature features of the ’50s and ’60s, right down to the poor quality film, “rubber monster,” bad dialogue, numerous puns and negligible budget. What makes this film so unique is the gathering of luminaries that came out of the woodwork to participate, including the original stars of classic films like “The Thing” (Kenneth Tobey and Robert Cornwaithe) and “War of the Worlds” (Ann Robinson and Les Tremayne), “Revenge of the Creature” (John Agar) and “Plan 9 From Outer Space” and “Night of the Ghouls” (Paul Marco).
In addition to the stars of the ‘Golden Age” of horror/sci-fi/creature films, we’re treated to the addition of ’80s and ’90s scream queens, Brinke Stevens, Linnea Quigley and Michelle Bauer.