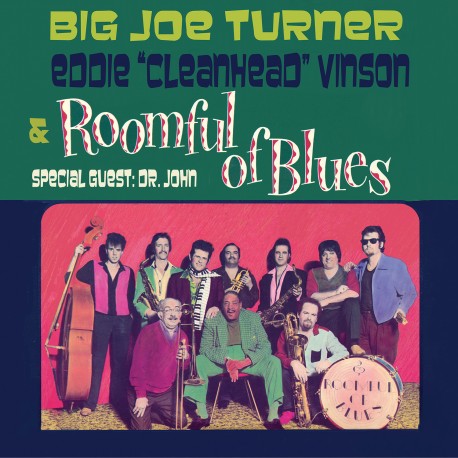 Once you made Doc Pomus’ “A” list, 3 a.m. phone calls became commonplace. Sometimes they involved getting to the back room of a goulash joint with fresh cash so he could retain his title as “The World’s Second Worst Poker Player.” (The undisputed worst poker player in the world, the man who retired with the belt, was Doc’s confrere, the legendary “License Plate Benny.”) Other times you’d be dispatched to help a down and out musician or singer who was in need of immediate attention regardless of what time it was. But many times the calls had to do with a hot new act Doc had discovered at one of the out of the way clubs he frequented that so excited him he couldn’t wait until morning to tell you about it. Bette Midler, The Fabulous Thunderbirds, The Neville Brothers and Roomful Of Blues are the first that come to mind, although over the years there were many others.
Doc and I produced the first Roomful of Blues album together, and he went on to work with them in the studio from time to time. He and Bob Porter are responsible for the two albums contained herein. They’re fun records and were exciting ones for Roomful as they got a chance to work with two of their heroes, Big Joe and Cleanhead.
I’ve asked Doc’s daughter, Sharyn Felder, to jot down a few remembrances of her father’s special relationship with Joe.
Big Joe Turner was my father’s hero and life-long inspiration. From when he first heard Joe’s “Piney Brown Blues” that changed his life forever, until my father’s Iast day. Joe Turner Was The Man.
When Joel Dorn (Doc’s best buddy) asked that I write something for this reissue, the following came to mind:
Coney Island- Joe craving a Nathan’s hot dog...
My father’s collection of gigantic Joe Turner medallion necklaces…
Joe sitting in the living room writing “K.C. Joe Turner” on every Big Joe record in the house…
My father and Joe shopping together at the Big Man’s store downtown...
Joe’s wife Pat’s platter of incredible potato salad...
...My father and Joe bullshitting before the start of yet another legendary Doc Pomus birthday bash that was certain to squeeze the air out of the tiny-two-room apartment above West 72nd and end well after dawn and long after the fried chicken and liquor had been drained. He and Joe sat planted in one spot, next to each other all night. Memories of those birthday party happenings blend together now, Big Joe singing and shouting away—
“Alrighty!!!”. Tiny Grimes playing, Mike Stoller’s wife Corky working the electric piano, Ben E. King and various Drifters drifting in and out, Otis Blackwell, Roomful, Tom Waits, South Side Johnny tending bar, and on, and on.
...And driving down I-95 from Providence, from a great night of performances of Joe with Roomful at Ritchie Lupo’s Heartbreak Hotel (a place that actually offered on its menu Doc Pomus and Joe Turner sandwiches), Joe seated in the front passenger seat, drinking coffee and chain smoking through the night, swapping stories with my father about people from long ago and laughing. Joe was in a way non-verbal, and my father the opposite, yet their connection was deep.
Then there was the Cookery event. Joe performing at the Cookery on University Place. We were sitting with Joe between sets, when gentlemen-owner Barney Josephson’s wife began treating Joe with what my father thought was great disrespect, berating and humiliating him and prohibiting him from having a drink. My father got so pissed at her we had to leave before Joe went back on. Out of the Cookery, my father had his driver phone in a bomb scare. And we watched from his van at the corner as the place emptied out. He and Joe corner as the place emptied out. He and Joe had many laughs about it later.
Mostly, I remember many, many nights at the old Tramps on East 15th Street, a block from Joe’s apartment. Joe on stage, packing them in night after night and my father there night after night holding court, fending off the nightly insanities, making everyone knew once again just how great Joe was and faithfully watching the man who called him ‘Cuz.’
Doc and Joe and Cleanhead are all gone now, but the songs and the singing and playing will be with us forever. Thank God.
Keep A Light In The Window.
— Joel Dorn

Joe Turner, the old Blues Train, keeps on rolling along. He still takes the bends wild and wide and the echo chamber in his voice won’t quit for a minute. He’s a seventy-one year young miracle who is probably the greatest blues singer who ever lived. And then again, he may really be the quintessential American singer of all time. And he’s my life-long idol, deep friend and musical inspiration. Here is his latest recording achievement. I hope you enjoy Ate much as I do.
-Doc Pomus, New York City

Late in this recording session, Big Joe Turner had finished all his vocals, and Roomful of Blues was about to record their instrumentals for the date. Someone asked Joe if he wanted to leave; he replied “No, I want to sit here and listen to these guys play.” A lot of people like to hear “these guys play.” Roomful’s contribution to this recording cannot be underestimated. The strong and exciting playing, their arrangement contributions, all added immeasurably to this album. Roomful’s leader Greg Piccolo, with AI Copely, Doug James and the rest of the band, contributed heavily.
Dr. John’s playing on “I Want A Little Girl” is a gem; ditto the strong guitar of Ronnie Earl Horvath on “I Know You Love Me”. Bouquets to Doc Pomus who, with untold patience, coached Big Joe through the new material. If it wasn’t for Doe Pomus, the session would not be as great as it is - or may not have come off at all. This was a collective effort, pruned and finished by co-producer Pomus with the very professional co-producer Bob Porter and engineer Malcolm Addey.
- J.D.

Bob Porter produced the Roomful Of Blues/ Eddie “Cleanhead” Vinson record and offers the following thoughts.
I first became interested in recording Eddie Vinson after hearing an album done in Montreaux, which featured him doing Bird and Monk tunes. He was from Houston and learned the saxophone with guys like Arnett Cobb and Illinois Jacquet, blues from Big Bill Broonzy, and bebop from Charlie Parker and Bud Powell. Rarely does one find a player with this amalgam of influences.
Our first venture together was done in Los Angeles and featured a small band sound with an equal amount of vocals and instrumentals. Eddie worked as a single, and when Shirley Setzer suggested recording him with Roomful of Blues, this seemed like a natural idea. The players in Roomful were not only quality musicians, they were very knowledgeable about the music and the musicians who originated the styles they favored. To a man, they were dedicated cats.
Eddie Vinson is gone now, but Roomful is still out there and, if anything, the band is even more popular today. They are true road warriors, and they still kick ass each time out.
- Bob Porter, March 1997