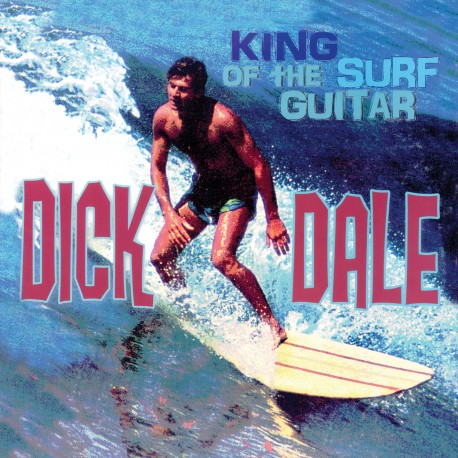 1. Miserlou
For sheer excitement “Miserlou” is hard to beat, and the surfer’s slide effect created by Dick Dale with a swoop of the hand down the guitar’s fretboard became a much used technique by the surf gui­tarists who followed. Dale’s “Miserlou” (aka “Misirlou”) is now rightly regarded as an all-time classic recording and the moment of birth for the instrumental surf music style which took the West Coast by storm. After this it seemed that the whole of California was awash with teenage surf groups. Dick’s rather tamer orchestrated version of this number appeared on his first LP Surfer’s Choice as “Misirlou Twist”.

2. King Of The Surf Guitar
The title track from Dick’s second LP was released simultaneously in June as his first single for the summer of ‘63. Written by Alonzo B. Willis, who was also responsible for “Peppermint Man”, it is very much in the style of Duane Eddy’s Top 20 hit “(Dance With The) Guitar Man” from the previous year. The female vocalists on both records were the top Los Angeles’ female session group The Blos­soms featuring Darlene Love who, apart from their prodigious career as backing singers, featured on hits credited to both The Crystals and Bob B. Soxx & The Blue Jeans.

3. Let’s Go Trippin’
Dick had released a series of vocal singles on his father’s Del-Tone label before establishing a following of surfers through his residency at the Rendezvous Ballroom at Newport Beach in Balboa, California. This association with the surfers and the evolution of Dick’s powerful staccato guitar playing led to the style becoming known as surf music, and the release of “Let’s Go Trippin”’ in September 1961 is recognized by many as the first instrumental surf record - the point of conception of the surf style. Despite only being released on his family’s own Del-Tone Records label, it reached an impressive #60 on Billboard’s national chart and featured on the Surfers’ Choice LP.

4. Surf Beat
The surf music genre was well and truly christened with the release of “Surf Beat”, the follow-up single to “Miserlou” which was also used as the vibrant opening track on his Surfer’s Choice LP. The heavy staccato sound of Dick hammering the lower strings of his guitar to a thundering “da-da - da; da-da - da” riff is the definitive surf beat.

5. Shake N’ Stomp
One side of the follow-up single to “Let’s Go Trippin”’ and another included on his first LP, the fiery “Shake n’ Stomp” has some blazing solos from Dick as well as early evidence of his fast double-picking technique that was to become such a trademark.

7. Hava Nagila
On this standout recording from Dick’s second album (and B-side to “King Of The Surf Guitar”) he gives the old Jewish folk song a “Miserlou” arrangement to great effect. Hava nagila translates as “let’s rejoice” - indeed!

8. The Wedge
Capitol released Dick’s Checkered Flag album in late 1963 whilst hot rod music vied for popularity with surf music as the latest craze. Tucked in amongst the revved-up titles on the track list was this pow­erful surf blast with its reference to The Wedge, a world famous surf­ing spot located at the east end of the Balboa Peninsula. In the right conditions waves bounce off the rock jetty to create a second wave that can meet up with the following wave of the set to produce com­bined peaks of up to 30 feet high in a very unpredictable pattern. The shore break of the steeply sloping beach also creates a very strong backwash. Surfing here is therefore both exciting and danger­ous, which makes “The Wedge” the perfect title for this dynamic track.

9. Tidal Wave
Dick wrote this evocative theme for his Summer Surf album in the summer of ‘64. His lush reverb guitar tone fronts Hank Levine’s arrangement with its saxes, busy drumming and an atmospheric chorus.

10. Mr. Peppermint Man
Originally the A-side to “Surf Beat”, this track represents the R&B style that Dick was playing in live concerts to excite the kids and out of which his surf sound evolved. “Peppermint Man” also featured on his first album along with the similarly raunchy vocals “Fanny Mae” and “Lovey Dovey”.

11. Surfing Drums
Dick Dale meets Bo Diddley. For sheer raw musical excitement it’s a combination that’s hard to beat as Dick plays lead, adds some vo­cals, and then takes the drum break through to the fade on this Surfers’ Choice album track.

12. Jungle Fever
The follow-up to the King Of The Surf Guitar’s national hit “Let’s Go Trippin’”, this exciting yet much-overlooked number evolved into “Surfing Drums” for Dick’s first LP. Stinging, shimmering guitar over a Bo Diddley beat - just imagine how an extended live version must have gone down with the dancers at the Rendezvous Ballroom on the beachfront at Balboa.

13. A Run For Life
This orchestrated version of a Dick Dale tune was arranged by Los Angeles producer Don Ralke. It was released as a single on Deltone in January 1963 and revisited, without the extra instrumentation, as “The Wedge” for his Checkered Flag album later that year.

14. Surfin’ Rebel
As our surf session draws to a close the third of Steve Douglas’s numbers on Summer Surf shows how Dick’s style had mellowed to fit the needs of a major label looking to reach an audience beyond his established West Coast fans.
Notes by Alan Taylor & Dave Burke of Pipeline (www.pipelinemag.co.uk) the rock instrumental magazine.
With grateful acknowledgement to David Arnson and Monica Rex whose interview with Dick Dale was published in Pipeline Magazine, Robert Dailey whose book Surfin’ Guitars is based on his interviews with many surf musicians from the ‘60s, and John Blair whose book The Illustrated Discography Of Surf Music 1961-1965 is the surf music collector’s bible.