> Television>Rod Serling's An Evening In The Zone 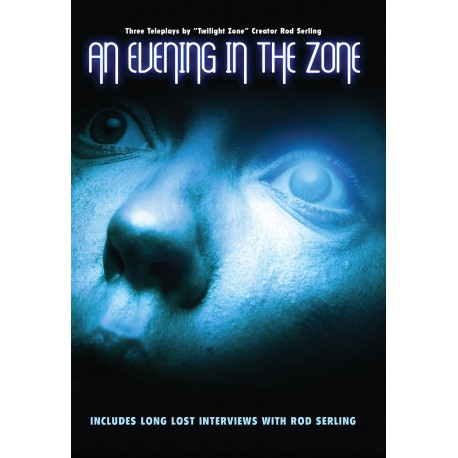 Rod Serling's An Evening In The Zone

The Nevada Proving Ground is set for another nuclear bomb blast at 4am. A harried artist is rushing to finish the mannequins he’s been hired to construct that will populate a house at ground zero. His nagging wife, who does nothing but complain about his work, finally pushes him over the edge. As contracted, he delivers five “people” to the house that’s about to be destroyed.
(30 min. / b&w)

A brand-new senator, James Norton, discovers his father, a one time senator, is accused of being a fraud. Norton is offended by this accusation, and spends almost all his time and energy attacking his colleague, demanding he retract the accusations against his father
As for Chester Morris, a political guru, is hired by James Norton to consult on how to handle the accusations against his father. Where their relationship goes is quite astonishing.
(60 min. / b&w)

Rod Serling created this raw, tough and at the same time, deeply moving outcry against prejudice.
Serling laid the scene of his play in a Southwestern town racked by unremitting drought and worn by an ever-present sun. In their own poverty, the stricken townspeople turn to bigotry and prejudice against their Mexican colony as a release for their own frustrations. An innocent Mexican boy is sacrificed to a lynch mob by an ineffectual sheriff (Steiger). The slaughter leads to a brooding darkness involving the remorseful relatives of the Mexican youngster and the sullen townspeople.
TRIVIA: Supposedly, Serling had to fight executive interference, requiring some changes in the story line, before getting the program on the air.
(83 min. / b&w)