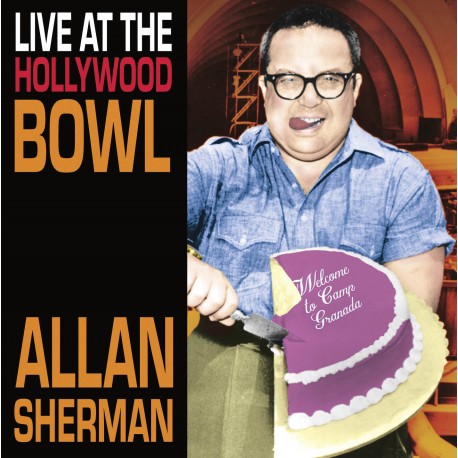 Alan Sherman sold more comedy albums than anyone in his generation.

“ALLAN SHERMAN MAKES HISTORY AT HOLLYWOOD BOWL” — that was Variety’s headline following Sherman’s record-breaking concert on Friday, July 19, 1963, when he performed live at the Hollywood Bowl to an over-capacity crowd of 16,076.
This album, “LIVE AT THE HOLLYWOOD BOWL” by Allan Sherman, contains his complete concert performance — every hilarious song he sang, every nutty joke he told, every spontaneous ad lib, and even a couple of goofs Sherman turns into moments of comedy gold. When you play all twenty-nine tracks back-to-back they exactly recreate everything the Hollywood Bowl audience heard on that magical night.
Behind Allan Sherman’s ridiculous voice is truly glorious music performed by the full 106-musician Hollywood Bowl Orchestra — with all new arrangements and orchestrations expanded just for this one remarkable performance.
Special guest-star Rosemary Clooney joins Sherman for the duet of “Sarah Jackman.” The New Christy Minstrels accompany him for several songs. And Sherman himself conducts the New Christy Minstrels for “No One’s Perfect” — no small feat considering he can’t read music!