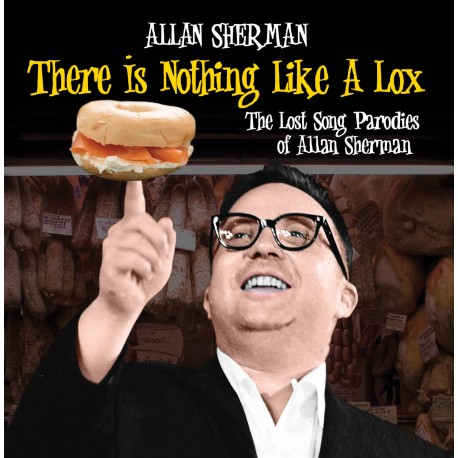 Alan Sherman: There's Nothing Like A Lox--The Lost Song Parodies of Alan Sherman

Throughout the 1950s, Allan Sherman wrote, rewrote and informally performed for friends and family Jewish parodies of songs from the great Broadway musicals. It was his Plan B.
When Sherman left the University of Illinois and arrived in New York in 1945, his aim was to write a musical and get it on Broadway. He took his shot with The Golden Touch, an updated version of the fable of King Midas. The script presents the travails of a busboy at a Jewish delicatessen that surrenders his Jewish identity for a chance at high-society success. He achieves it, but loses his great love, and like Midas learns his lesson and happily surrenders his golden touch.
Despite interest from producers, it never made it to the stage.
But that musical’s suspicion of success, encouragement to remain true to oneself, and proud assurance that chopped liver and other homely hallmarks of Jewish life were worth keeping and nothing to be ashamed of remained the themes
of Sherman’s life. In the 1950s, those themes found expression in Jewish song parodies of Broadway musicals that Sherman called “Goldeneh Moments from Broadway.” These Jewish parodies are what Sherman called his “masterpiece,” but until now they have never been available to the general public. They are a comic treasure, and they are also the missing piece of Sherman’s career. Now we can see that Sherman’s great first album, the 1962 My Son, The Folk Singer, rich in Jewish song parody, did not come out of nowhere. There was something that came before.
“Goldeneh Moments from Broadway” was an ironic title. There were almost no such moments. That’s because there were virtually no Jewish stories or characters on stage. The Jews were all backstage, writing themselves out of the script. So Sherman turned Broadway inside out to discover the Jewish version of the smash hit. That’s how he found “There Is Nothing Like A Lox.” It was hiding behind Rodgers and Hammerstein’s “There Is Nothin’ Like A Dame.”

We got herring, sweet and sour,
We got pickles, old and young,
We got corned beef and salami and a lot of tasty tongue
We got Philadelphia Cream Cheese in a little wooden box,
What ain’t we got?
We ain’t got lox!

Sherman’s parody of the melodramatic tearjerker, “You’ll Never Walk Alone,” from Rodgers and Hammerstein’s Carousel, also uses Jewish humor to cut the original down to size. Instead of the inspirational advice to “walk on,” Sherman offers more mundane directions, and as he does so he follows a Jewish set of instructions laid down by the insistence on tachlis, down-to-earth details.

When you walk through the Bronx
Hold your head up high
And look for a sign, “Fordham Road.”

Sherman knew what he was doing, and he wanted his listeners to know it, too. “What you are about to hear is entitled, ‘Goldeneh Moments from Broadway,’” is how Sherman introduces a 1963 concert performance of these songs. “I said to myself, what would have happened, how would it have been, if all of the great Broadway hits of the great Broadway shows had been written by Jewish people — which they were.” It was not a new line. He had been using it since the mid-1950s, and it represented Sherman’s new strategy to challenge the Jewish invisibility on the Broadway stage. Instead of writing original musicals like his Golden Touch, he would turn already existing musicals into stories about Jews.
But Sherman’s introductory patter is more significant than that, and as mind-jarring as it is to contemplate any similarity between Sherman and that holy man of comic Jewish cool, Lenny Bruce, Sherman’s paradox is as much a hipster riddle, as much a conundrum for insiders to get and outsiders to “huh?” over as Bruce’s assertion that certain non-Jews are Jews and vice versa, that “Count Basie’s Jewish . . . Eddie Cantor is goyish.” Sherman’s line said, “Dig, I’m Jewish. Lerner and Loewe are goyish.” It points out that Broadway musicals are Jewish works without Jewish content. The Gershwins, Rodgers and Hart, Rodgers and Hammerstein, Lerner and Loewe, Frank Loesser, Stephen Sondheim, Irving Berlin, E. H. “Yip” Harburg, and other Jews created the bulk of Broadway’s musical theater, but no one would ever guess it from what they wrote. The takeaway lesson was that success depended upon leaving Jewish ethnicity behind. That was a message Sherman had been fighting all his life, and his Broadway parodies were his battle plan. They peeled off the camouflage worn by Broadway’s Jewish creators, expelled them from the Eden of being assimilated Americans, and led them back into the exile of Jewishness, which for Sherman was a place of refuge and comfort.
Of course, like all great comedians, Sherman’s desire to entertain far outweighed any lesson he wanted to get across. For Sherman, laughter came first, and he was happy to break his own rules when he spotted an irresistible parody.
For example, Sherman borrowed “Seventy-Six Trombones,” from The Music Man, to create a comic tribute to Jewish country club life. Parodying Meredith Willson’s work was at odds with Sherman’s quip about Jews writing all the Broadway hits. Willson was not Jewish. But Sherman evidently saw all musical theater as a Jewish realm. In any case, the opportunity was too good to pass up.

Seventy-six Sol Cohens in the country club!
And a hundred and ten nice men named Levine
And there’s more than a thousand Finks
Who parade around the links
It’s a sight that really must be seen.

What a song. What a collection. What more could a Sherman fan want? Just the end of these liner notes and a chance to listen to the man himself. Enjoy.