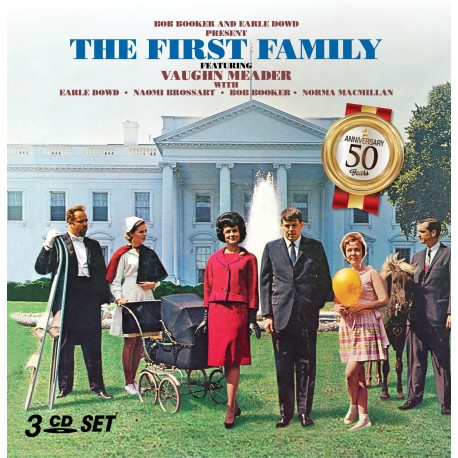 The First Family comedy album was recorded on October 22, 1962, as a good-natured parody of President John F. Kennedy, both as Commander-in-Chief and as a member of a large, well-known political family.

The First Family comedy album was recorded on October 22, 1962, as a good-natured parody of President John F. Kennedy, both as Commander-in-Chief and as a member of a large, well-known political family. It was the largest and fastest selling record at more than a million copies per week for the first six and one-half weeks in distribution. By January it had sold more than seven million copies, and won a Grammy® Award for Album of the Year in 1963.
The First Family Volume 2 sold 7.5 million copies, an unprecedented amount for any album at the time, let alone one of comedy.
Within weeks, many Americans could recite favorite lines from the record, including “the rubber schwan [swan] is mine,” and “move ahead ... with great vigah [vigor],” the latter lampooning the President’s own words. The album poked fun at Kennedy’s PT-109 history, the rocking chairs he used for his painful back, the Kennedy clan’s well-known athleticism, football games and family togetherness, children in the White House, and Jackie Kennedy’s soft-spoken nature and her redecoration of the White House, plus many other bits of knowledge that the public was eager to consume. Kennedy himself was said to have given copies of the albums as Christmas gifts, and once greeted a Democratic National Committee group by saying, “Vaughn Meader was busy tonight, so I came myself.” At one press conference, Kennedy was asked if the album had produced “annoyment (sic) or enjoyment.” He jokingly responded, “I listened to Mr. Meader’s record and, frankly, I thought it sounded more like Teddy than it did me. So, now he’s annoyed.”
Immediately upon hearing of Kennedy’s assassination, producers Booker and Doud pulled both albums from sales, and had all unsold copies destroyed so as not to seemingly “cash in” on the President’s death. Both albums remained out of print for many years.

VAUGHN MEADER, who first came to nationwide attention via the Talent Scouts television show during the summer of 1962, was the subject of a major story in LIFE magazine. This was followed by extremely successful appearances on the Ed Sullivan Show in the fall of 1962. He has also been a headliner at the smarter New York supper clubs, including the popular Blue Angel.
NAOMI BROSSART makes her recording debut on this album. Naomi has played in little theatre, has been a model, and was one of New York’s fabulous Copa girls. She has studied acting with Herbert Berghof and promises to be one of the leading young comediennes of our time.
NORMA MACMILLAN, the voice of countless television and radio commercials and cartoons for television and motion pictures, is probably the best known child’s voice in America. She has appeared in over one hundred stage productions, is a playwright, and has appeared on television on The Merv Griffin Show.
JIM LEHNER has done a multitude of voices on numerous television and radio commercials. He is a writer/actor and in the past has been associated with Jonathan Winters, Jim Backus, Arthur Godfrey, Tony Randall and Dennis Day.
BOB MACFADDEN a voice expert, has accounted, with Bradley Bolke, for over 1000 television and radio commercials over the past ten to fifteen years.
BRADLEY BOLKE a voice expert, has accounted, with Bob MacFadden, for over 1000 television and radio commercials over the past ten to fifteen years..
MARK HUNTER, for all his years, has appeared on virtually every dramatic show on television, including The Defenders and Naked City, as Ingrid Bergman’s son on a TV special and on Broadway in “Stop The World I Want To Get Off.”
GEORGE FOSTER has distinguished himself as a writer in television and radio over the past fifteen years. He has been the recipient of The Peabody Award, The Christopher Award, The Sylvania Award, and four Emmy nominations. He has worked with Fred Allen, Tallulah Bankhead, Perry Como, Milton Berle and Bing Crosby.
BOB BOOKER and EARLE DOUD are making their co-production debut. In addition to having conceived and created this album, they also lent their talents to the writing and performing. EARLE DOUD has written for Jack Paar, Johnny Carson, the late Ernie Kovacs, Steve Allen, Jackie Gleason, and Father Knows Best. BOB BOOKER’s many-faceted talents have led him through radio and television as writer, director, disc jockey, performer and manager.
The action takes place in all the important and familiar places connected with THE FIRST FAMILY.
Notes are taken from the original 1962 album.