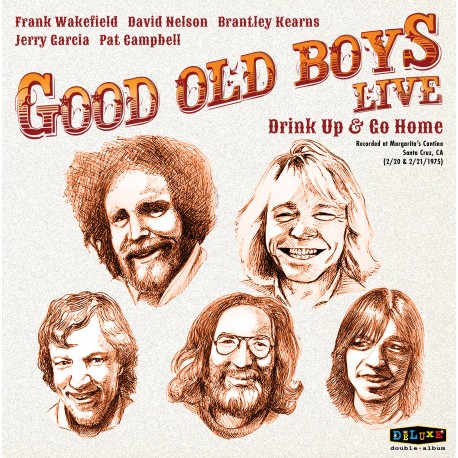 Some of the greatest musical moments happen only once, in a live setting, and if you’re not there to experience them at the time, they’re lost to history. But every now and then, a buried treasure is discovered that brings a lost moment back to life and thrills music fans. Such is the case with this recently unearthed live recording of the all-star bluegrass band the Good Old Boys playing at Margarita’s Cantina, a Santa Cruz club, in February of 1975.
Most Jerry Garcia fans know of his early interest in bluegrass music, which was an essential part of Garcia’s development as an instrumentalist and songwriter. Starting in 1973, Jerry played banjo with Old and In the Way, his own Marin County bluegrass band with singer-guitarist Peter Rowan and mandolinist David Grisman. But many Garcia fans are unaware that in 1975, during the Grateful Dead’s hiatus, Jerry produced a seminal album for another bluegrass group called the Good Old Boys, featuring guitarist David Nelson from the New Riders of the Purple Sage, and Frank Wakefield, one of the greatest mandolin players in the genre. The studio band included fiddle player Chubby Wise, banjo player Don Reno, and stand up bass player Pat Campbell. The Good Old Boys made one album for Round Records (the Dead’s own label), recorded up at Mickey Hart’s Ranch in Novato, CA. I was fortunate enough to attend those sessions as they tracked a number of bluegrass classics as well as several original compositions into what eventually became their album titled “Pistol Packin’ Mama”.
Shortly after completing the Good Old Boys album, the group decided to do a series of live shows, but during that time period, two of the key players from the original studio lineup—Don Reno and Chubby Wise—were unavailable to go on the road. In a conversation with bassist Pat Campbell, Garcia mentioned that he would love to sit in on banjo, and with Jerry’s participation, and the addition of fiddle player extraordinaire Brantley Kearns (known for his contributions to Dwight Yoakam, Marty Stuart and his memorable appearance in the film “McCabe and Mrs. Miller”), a new version of the Good Old Boys emerged.
On February 20th and 21st in 1975, the Good Old Boys played for two nights at Margarita’s Cantina, and my brother John Cutler and Jim Renney were in charge of the group’s live sound. John decided to record those shows on a Nagra stereo tape recorder that he borrowed from Owsley “Bear” Stanley. The performances were well received, with outstanding singing, blistering mandolin and violin solos, and a crowd pleasing vibe that’s apparent from the moment the band takes the stage. Here, for the first time, thanks to a full restoration of these 2-track tapes, fans can finally hear this music in all its glory.
—Bill Cutler
San Francisco, 2018