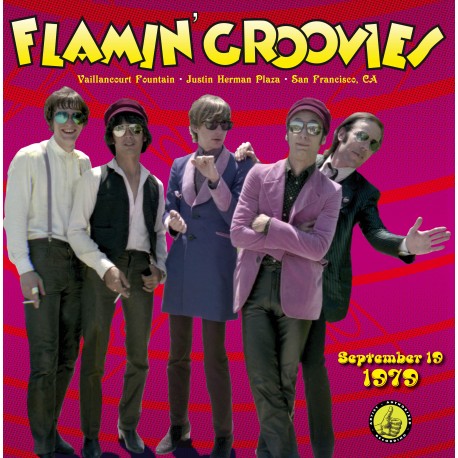 Flamin' Groovies is an American rock band that formed in San Francisco in 1965, originally co-led by Roy Loney and Cyril Jordan. After the Groovies released three albums, on Epic and Kama Sutra, Loney left the band in 1971. He was replaced as co-leader by Chris Wilson, and the band's emphasis shifted more toward British Invasion power pop.

By 1976, after a number of significant personnel changes and busted record deals, the Flamin’ Groovies signed a new contract with Sire Records and debuted a new and more modern musical approach—instead of sounding as if their influences stopped at 1961, the Groovies now sounded like the newest British hitmakers to follow the Beatles onto the American record charts in 1965. Between 1976 and 1979, the Brit-influenced edition of the Flamin’ Groovies led by Cyril Jordan recorded three albums (Shake Some Action, Flamin’ Groovies Now, Jumpin’ In The Night) for Sire that became their best known work in the United States. They rarely made a record that wasn’t at least a kick to hear.
Vaillancourt Fountain (originally broadcast live on KSAN in San Francisco, CA) is one of the two Flamin’ Groovies shows in 1979 that were released. This soundboard recording was confusingly labelled Jumpin’ In The Night (otherwise known as Vaillancourt Plaza where it was recorded). This concert serves to document a typical Groovies gig of the time with staples like “Shake Some Action,” “I Can’t Hide,” “All I Wanted,” covers of “Feel A Whole Lot Better,” Moby Grape’s “Fall On You,” the odd Beatles and even NRBQ’s “I Want You Bad”—a perfect cross between British Invasion pop, old-time rock & roll, nervy new wave style and garage rock spirit.