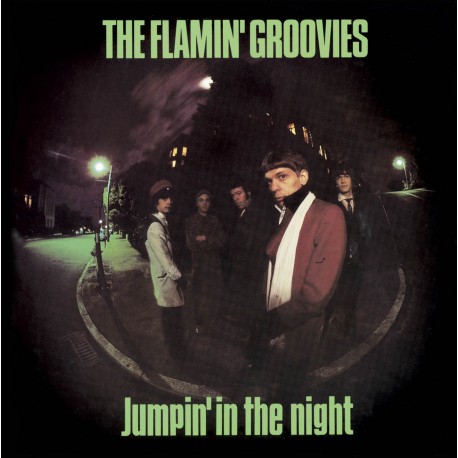 The Flamin' Groovies: Jumpin' In The Night

I’m listening to this album for the first time in over 20 years. But every note, harmony, fuzz tone and 12-string strum is firmly etched in my memory. Saw the Flamin’ Groovies about a dozen times in 1980, the year that followed the release of Jumpin’ In The Night and each show blew me away, knocked me against the walls and left me in awe of the power of every string that reverberated on stage (I seem to remember that two of the guitarists played 12-strings and that the bass player played an eight-string bass but I could be wrong — take it up with my memory). This was power. This was pop. But it wasn’t power pop. It was the apocolypse in the disguise of jangle, garage, the Beatles, Byrds and Stones. The Groovies at the time of Jumpin’ In The Night had more in common with punk bands like The Clash, The Jam and the Buzzcocks than they did with cloying,
careful skinny-tie bands like The Knack.

You could argue that Shake Some Action and Teenage Head were more influential records. You could even argue they were better records. Go ahead. You might be right. But Jumpin’ In The Night was the record where I realized that homage wasn’t about imitation but rather about irreverance and exuberance. The best way to pay respect to your idols was to blow their blueprints to bits. The Flamin’ Groovies started with very familiar sounds and influences but ended up playing them with so much energy and command that it was easy to think that this wasn’t just a watered down facsimile of the ’60s — it was an improvement. Why? Because it was HERE, because it was NOW, because it was RIGHT THERE. I was only 19 so it was MY Aftermath, it was MY Younger Than Yesterday, it was MY Revolver and it knocked me out every time. Still does.