> Music>Dick Dale at the Drags 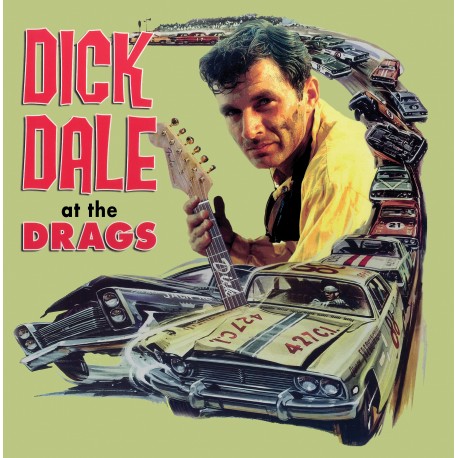 Dick Dale at the Drags

King of the Surf Guitars

1. Wild Wild Mustang
This tribute to the Ford Mustang was Dick’s second single of 1964 and was released just a few weeks after the spring launch of the car itself. The model was a big success with an appearance in the 1964 James Bond film Goldfinger and a million examples rolling off the line in its first 18 months of manufacture. The car is still in produc­tion but the Dick Dale vocal faded from view rather quickly and never featured on an album. Another version of this Gary Paxton and Barry Biglow song was recorded just a few days later by The Zip-Codes for their Mustang! LP.

2. The Victor
“The Victor” was paired with “Mr. Eliminator” for single release and appeared simultaneously on the same album. With its dramatic, ex­otic surf style it’s a classic ’60s Dick Dale instrumental and encap­sulates the maestro at his double-picking best.

3. Mag Wheels
Magnesium wheels were the first type of die-cast car wheels to be produced and were developed for use in racing due to their lighter weight and their ability to dissipate heat from the brakes. Written by producer Gary Usher with Richard Burns of The Hondells, Dick recorded “Mag Wheels” for his Checkered Flag album. Usher cut his own version around the same time but it remained unreleased for many years.

4. Mr. Eliminator
Dick’s Checkered Flag LP had signaled the switch to a hot rod theme at the end of ’63 and his first single of 1964, “Mr. Eliminator,” also provided the title track for his fourth album. The name was inspired by Tony Nancy’s dragster and the front cover photo showed Dick at the wheel.

6. Surf Buggy
Taking us off-road on a stop-start, switchback, rollercoaster of a ride over the dunes is Dick’s “Surf Buggy” from Checkered Flag. Stopping to pick up a tasty sax solo along the way, our journey is crowned by a viciously stinging surf guitar solo.

7. Taco Wagon
Providing authentic Mexican fast food to the crowds down at the dragstrip, the taco truck serves up soft corn tortillas filled with chicken, pork, beef, or shrimp grilled fresh right in front of you. This is another well-found title from the Mr. Eliminator album as the melody does have a certain “South Of The Border” flavor to it.

8. Nitro Fuel
Automobile technology provided plenty of terminology for hot rod lyrics and song titles. This one refers to the nitromethane fuel used in drag race engines which increases power output to around 2½ times that of gasoline. It doesn’t burn as fast as gasoline so the en­gine pumps still-burning fuel out of the exhaust, creating a dramatic tail of flame behind the dragster to match the engine’s roar — or the evocative sound of Dick Dale’s guitar on this Mr. Eliminator album track.

9. The Scavenger
“The Scavenger” was originally a vocal single paired with “Wild Ideas” in September 1963 before being selected as the opening track for Dick’s first hot rod LP Checkered FIag two months later. Penned by famed producer Gary Paxton and set to an arrangement inspired by Dion’s 1961 hit “The Wanderer,” it is a paean to a Dodge 426 Ramcharger advertised as “designed to be run in supervised, sanc­tioned drag-strip competition by those qualified.... Yet, it is stock in every sense of the word.”

10. Firing Up
The infectious riff that runs through this Mr. Eliminator track draws you in and provides the framework for Dick to improvise some seri­ous soloing and show off those delicious reverb guitar tones.

12. 426 Super Stock
This Gary Usher and Roger Christian composition was first released in the summer of ’63 when Usher’s own version with his studio group The Superstocks appeared on the Capitol compilation LP Hot Rod Rally. Along with fellow Superstocks Richard Burns and Dennis McCarthy, Usher provided backing vocals for Dick’s Checkered Flag album which was released soon after and included this recording of the song. Its provenance and vocal harmony styling made it con-temporary with the sounds of the day and Dick’s solo gives it extra bite. The title refers to Chrysler’s 426 cubic-inch Super Stock engine which made Plymouths and Dodges the cars to beat that year.

14. Ho-Dad Machine
This down and dirty 12-bar grinder from Checkered Flag is suitably mechanical. A ho-dad may have hung out at the beach but he was not a surfer. Typically wearing black shoes, jeans and a white T-shirt, the ho-dads were greasers who were into cars and bikes
15. 50 Miles To Go
This Kenny Young song was used for the flip of Capitol studio group The City Surfers’ single “Powder Puff” in late ’63 before appearing on Mr. Eliminator. It’s a fast-moving piece most notable for its driving “Bo Diddley”/”Willie And The Hand” Jive arrangement

18. Flashing Eyes
Is this the blonde in the 406 flashing her eyes, or perhaps the head-lights of a Cobra rounding Dead Man’s Curve? Whatever it refers to, this Dick Dale original for his Mr. Eliminator set is a bright sparkling, hard driving instrumental that’s pedal-to-the-metal all the way.

19. Night Rider
From the Checkered Flag album, this is a good example of the lack of distinction between a surf instrumental and a hot rod instrumental - even its title provides no definitive answer. Riding the waves or rid­ing the strip, either way it’s a winner.