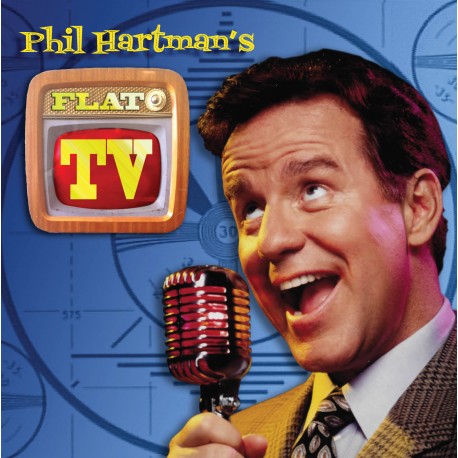 Phil Hartman was a chameleon. He could be gentle, quiet and reflective, but at the drop of a hat, he could also become any one of a boxful of characters...

This Phil Hartman tour-de-force was essentially a precursor of The Simpsons — a day in the life of a dysfunctional American family with all voices (except ladies) being supplied by Phil. Why has it never been released until now, you ask? Good question, dumb answer. In true Sagittarian fashion, I lost my copy of the tape. The recording engineer, my friend Britt Bacon (also a Sagittarian) managed to lose the master tapes. Phil was preoccupied with Saturday Night Live so he didn’t even notice. Fortunately for all of us, years later Britt discovered the tapes in a box in his garden shed, so now the world at large can enjoy another round of lunacy from the comedy mastermind of Phil Hartman. Phil was a chameleon. He could be gentle, quiet and reflective, but at the drop of a hat, he could also become any one of a boxful of characters, many of whom are featured on this recording, including John Wayne, Johnny Carson, Jimmy Carter, Henry Kissinger, Howard Cosell and Peter Lorre. I think my favorite memory is of a photo session (he was a photographer too) some time in the mid-seventies. Jeremy and I were recording at Spoiled Brat Studios when Phil walked in. He had not met Jeremy before and you would expect a handshake and some sort of greeting, but that wasn’t Phil’s style. He was carrying a small tape recorder on which he had pre-recorded his dialogue. He then proceeded to lip-sync (slightly off) to the recording: Hi! I’m Phil! You must be Jeremy! I’ve heard so much about you!” etc., etc. We were in stitches. It was one of the funniest things I’ve ever heard in my life. I sure miss him, and the wonderful cast of charaters he gave us on SNL. God bless you Phil. wherever you are.
—Chad Stuart
Sun Valley, Idaho, 2002

P.S. For those of you interested in the technical details, we recorded this album the hard way; no off-the-peg sound effects for us! We used scrunched up cellophane for the sound of eggs frying and we strapped two mikes onto Steve Small’s Fiat convertible for the “Marge and the Salesman” segment. All the dialogue was recorded first on 2-TR. This was dubbed later to a Tascam 8-TR, where we added all the effects.