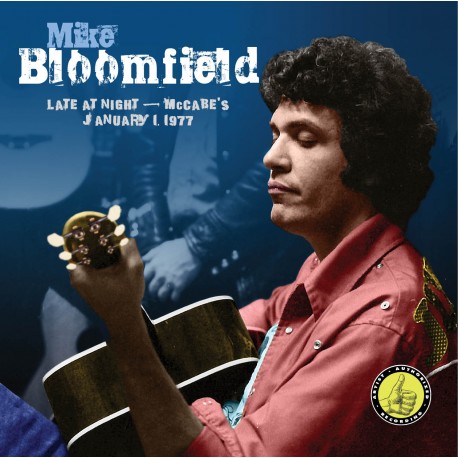 On January 1, 1977, Mike Bloomfield performed two incredible sets at McCabes Guitar Workshop in Santa Monica, CA. Both sets were completely different, each one showcasing Bloomfield’s legendary skills on the guitar but what made the late show totally unique was the first half was performed acoustic and the second half, electric.
Bloomfield’s impact, his effect on both musicians and public alike is undeniable. He was a multi-faceted artist: a masterful writer, arranger and guitarist. He was also one of the most in-demand session musicians in the country, backing the likes of Bob Dylan, Peter, Paul and Mary, and a host of great bluesmen.
In the mid-1960’s Mike joined the Paul Butterfield Blues Band, one of the most successful blues groups of the sixties but the success he enjoyed with Butterfield provided the impetus for Bloomfield to step out and form his own group, The Electric Flag.
Mike carefully handpicked his bandmates including Barry Goldberg, Nick Gravenites, Buddy Miles and Harvey Brooks, among others. Under Albert Grossman’s management, they were promptly signed by Columbia Records and their initial effort was the soundtrack to the Peter Fonda Film “The Trip”, replacing Gram Parson’s International Submarine Band.
Their debut performances was in June, 1967 before an audience of 55,000 at the Monterey Pop Festival, which led to a series of gigs in the Northeast and the Bay area. In March, 1968, “A Long Time Comin’” their first album was finally released but by June, 1968, only months after the album’s release, Bloomfield quit the group, unable to continue because of exhaustion brought on by his insomnia and how he medicated to deal with it.
Their sophomore effort, “The Electric Flag: An American Music Band” was issued in late 1968 but without Bloomfield’s influence, the band broke up after being in existence for just over a year. Still, their influence and music continues to live on,
On this McCabe’s performance, Bloomfield is backed by Mark Naftalin on keyboards (Paul Butterfield Blues Band), Buddy Heklm on percussion (Tim Buckley) and Beull Neidlinger on bass (worked with Frank Zappa, Gil Evans and Tony Bennett). The performance was recorded by Bloomfield producer and friend, Norman Dayron.
This album stands as a tribute to one of our great musicians, as Mike performs a selection of original and classic rock and blues material.
Special thanks,
Robert Scheri