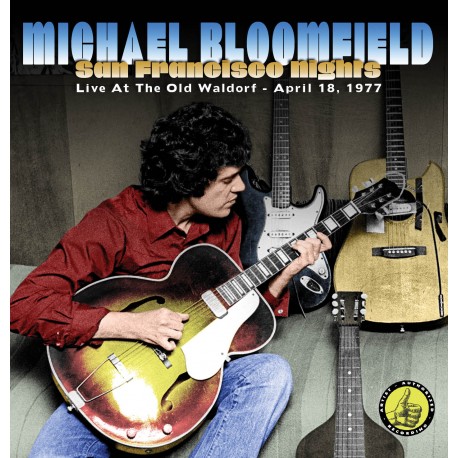 The transcendent moments captured on this CD are the basis for Mike Bloomfield’s place in the pantheon of stellar guitarists and for his reputation as a complete original.

The transcendent moments captured on this CD are the basis for Mike Bloomfield’s place in the pantheon of stellar guitarists and for his reputation as a complete original. These recordings are for those who not only appreciate great guitar playing but also want to better understand the legend that is Mike Bloomfield. The performances lay bare his genius; he was playing in his hometown, in front of and with his friends and he felt comfortable cutting lose. No expectations, no pressure, he was home…
Mike Bloomfield and Friends was a regular attraction at the Old Waldorf over a period of 6 months, from Dec. 1976 through May, 1977. He enlisted rock and blues royalty to play with him, including Barry Goldberg, Nick Gravenites, Mark Naftalin and other luminaries and they were recorded by legendary producer Norman Dayron. He went on to produce “Sweet Blues: A Film About Mike Bloomfield” that nicely bookends his relationship with Bloomfield.
Many years after his death, Bloomfield still exerts a gravitational pull over anyone who heard his ground breaking blend of blues-rock guitar power and modal improv.
The Old Waldorf was a music venue located in San Francisco, California. The famous club was located at 444 Battery St, and was originally opened by Jeffrey Pollack in 1976 before selling it to Bill Graham who closed it in 1983. During its time, Old Waldorf hosted some of the biggest names in the music industry, such as AC/DC, Blue Öyster Cult, Iggy Pop, Rory Gallagher, Metallica, Pat Benatar, R.E.M., Spirit, Poco, U2, Dead Kennedys and John Cougar.