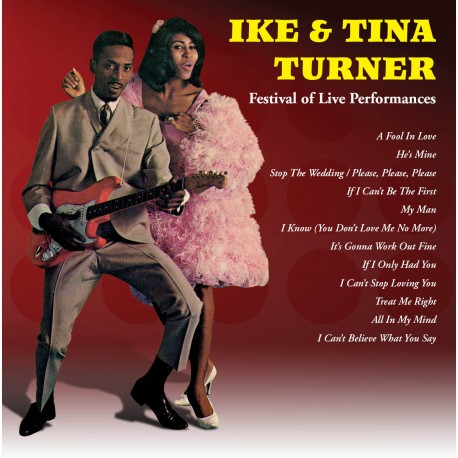 Ike and Tina play some of the more unforgettable songs early in their career.

For those who grew up becoming aware of Rhythm & Blues in the late fifties and early 1960s, there is that moment, a tipping point if you will, when something clicks and the music reaches inside and hits you in a place that no other music does. It’s raw, visceral and emotional. Well, that happened to me at Pacific Ocean Park (POP) in Santa Monica, California. POP was a nautical themed amusement park, a cross between Marineland and Knotts Berry Farm. It was the Summer of 1960; a typical family Sunday outing at the beach. Unbeknownst to me Pacific Ocean Park had a small concrete ampitheatre with about 50 seats. I heard this commotion and looked over, and there they were, Ike & Tina Turner playing to unsuspecting suburban families who were pre-occupied with the giant aquariums. It was bizarre. All I remember is my parents waving me off the show to meet them at The Sea Serpent Roller Coaster. Who cared about low-brow amusement when you had the power of R&B in the afternoon salt air! The Ike and Tina Turner Revue was a powerful, electryfing show. They ran through their current material, Tina pulling out all the stops as lanky Ike scraped and yanked the strings of his white Stratocaster. Tina whirled, twirled and screamed “I Idolize You.” The only time I had ever seen someone sweat that much was as a result of physical labor. Well, this was physical, but it sure wasn’t labor. The excitement they generated was nothing short of phenomenal. Keep in mind, virtually no one went to POP to see Ike & Tina. You were a captive audience. Those too provincial headed for the Ferris wheel.
Surely Ike and Tina played some of the more forgettable venues early in their career. They had only two hits at the time, “I Think It’s Gonna Work Out Fine” and “A Fool In Love.” Their show was raw and righteous. Keep in mind this was the era that rock historians often cite as the doldrums in American music, just before The Beatles came ashore. This album demonstrates that there was indeed great music to see and hear. In fact, a case could be made for the early1960s as being an exciting time to dig R&B and Rock & Roll. For every teen idol, there was pure raw excitement in the Blues and R&B field. Certainly this collection is proof of that. Ike Turner had come a long way from his days as a talent scout backing up Jackie Brenston with his Kings of Rhythm on the first Rock & Roll record, “Rocket 88” in 1951. Tina was fresh out of Nutbush, Tennessee. She was actually born Anna Mae Bullock, but was given the name Sheena by Ike. They were explosive on stage. Their first hit in 1960, “A Fool In Love” was compelling even on record. Tina had a phenomenal range and could hit notes that seemed impossible
Most of this material was recorded in 1962 (some in ’64 at an unknown venue) at The Imperial Club in St. Louis, Mo. Originally, Tina started out as an occasional singer going by the name “Little Ann” on Ike Turner’s Kings Of Rhythm Band. Eventually, Anna Mae Bullock changed her name to Tina Turner and the band became The Ike & Tina Turner Revue.
This CD represents the formation of Soul music as we know it. Musically speaking, Ike and Tina were pioneers and pushed the limits of Blues and R&B. Ike can indeed, along with Sam Cooke and James Brown, be added to the list of artists credited with inventing Soul. Much has been discussed about the saga of Ike and Tina. In the aftermath, out of the ashes of that relationship are their performances. They were one of the greatest duos (if not the best) in R&B history. Their influence has been profound as Tina and The Ikettes dance routines have made their shows electrifying. Mick Jagger was inspired by the American Blues/R&B tradition and incorporated those moves into his stage presence with The Rolling Stones..
No matter how you come to appreciate Ike and Tina Turner, their legacy will always be those legendary live shows.
Festival Of Live Performances is a good place to start.