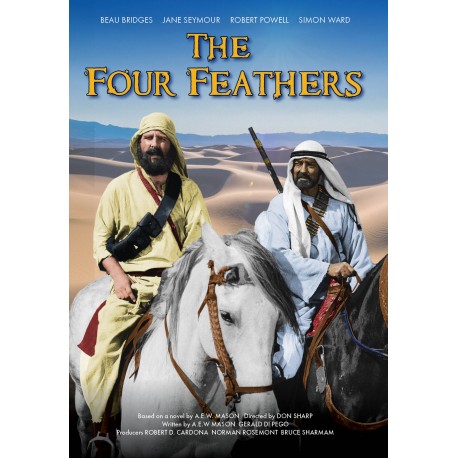 Lieutenant Harry Faversham (Beau Bridges) is the latest scion of a prominent military family. A deeply sensitive boy, he is much traumatised by the early death of his kind-hearted mother. Though he never wanted to be a soldier, he feels obliged to join the army. Though no coward (as he will later show), he has no interest in an army career. Having met and become engaged to Ethne (Jane Seymour), he decides to resign his commission. The fact that war in the Sudan is coming is irrelevant to this decision. During their engagement ball on the final day of his army career, Faversham receives telegrammes summoning him and three of his brother officers (Durrance, Willoughby and Trench) back to the regiment prior to being sent to the Sudan. As determined as ever to leave the army, Faversham burns the telegrammes so that he can pretend not to have been summoned back to the regiment before his commission expires. Willoughby sees him burning papers and notices that he is embarrassed to have been taken by surprise in doing so. On later realising that Faversham was burning the telegrammes from the army, Willoughby assumes that Faversham has done so because he is afraid of going to the Sudan. Durrance, Willoughby and Trench then send Faversham three white feathers, betokening cowardice, and turn their backs on him. When Faversham tries to explain to Ethne what has happened, she also reaches the same mistaken conclusion and gives him a fourth white feather. Following his regiment’s deployment, Faversham realizes he has made a grave mistake and, having toyed with suicide, finally resolves to redeem his honour.
Disguising himself as an Arab, Faversham makes his way to the Sudan determined to perform three acts of courage that will persuade each of his former comrades to take back their white feathers. He learns of an impending attack on the regiment, and tries to make it in time to save them.