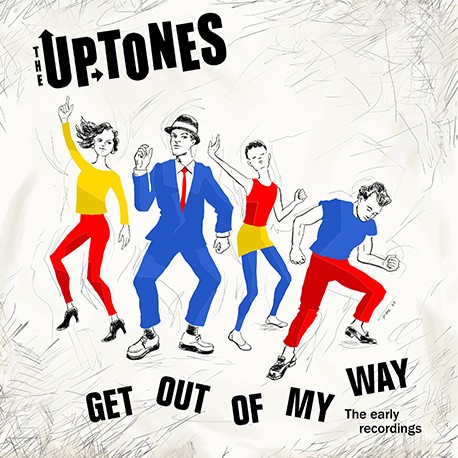 The Up-Tones, though not a ‘mod’ band, became a focal point for our Bay Area mod scene. Available on CD.
bandcamp

The first time I saw Quadrophenia, I was about 14, and I went by myself to a weekend matinee showing at the UC Theatre, Berkeley’s own cult movie palace. Proudly riding my Vespa 160 GS home (the model featured in the movie and album), I was fully wrapped up in reliving the images, music, and feelings it conjured. I turned onto Durant in the heart of the Telegraph Avenue neighborhood, and immediately I was being followed by an older model white convertible - which upon later inspection, was no convertible, but a sedan that had had its top just chopped off - crammed full of The Uptones! As we cruised along, they were good-naturedly yelling classic anti-mod jabs at me, and I was yelling back at them. It was great, it was like I was in Quadrophenia! But then, just as I got to College Avenue, my scooter broke down (as they do). Well now I was REALLY living out my Quadrophenia fantasy (or nightmare), and I was mortified! They drove off laughing, and I pushed my scooter home the rest of the way, also laughing. It was a great day. But I’m jumping ahead.

I know I am just one of the many legions who were transfixed and transformed when I first discovered ska through watching The Specials’ appearance on Saturday Night Live in 1980. I was 13, thrashing around the living room, trying to emulate their moves, and I was totally enthralled. I had to wait until the next weekend (since I’d already spent that week’s allowance) to go to Telegraph and buy their first album and a pin. I still have both. Along with The Specials, The Selecter and the Bodysnatchers became my favorite of the British ska bands -- I was always into music with a message. So a couple years later, I was definitely READY when I heard that kids from my junior high and our high school had started a ska band. It was the summer after 9th grade for me, when I first got to see The Uptones play at a backyard party. It was raucous magic, and they had their own waning-days-of-the-Cold-War message. I was an instant fan.

By that time I was a mod, and on the first day of 10th grade, Erik Rader sat next to me in journalism class. He sized me and my Fred Perry up, and we became fast friends. We often took very long walks all over town, talking about music, politics and modernism. I would peg his pants for him, for like two bucks, and somehow we both found time to work on the Berkeley High “Yellow Jacket” newspaper.

The Uptones, though not a ‘mod’ band, became a focal point for our Bay Area mod scene. We gelled around them. It was so exciting when a new date would be announced, and we would collect all of their great flyers (I still have many). We’d go to all of their shows, have scooter rallies & arrive to them as a group. We’d park out front, and then dance like crazy for the rest of the night. Later, when my friend Elizabeth Pepin and I started our mod fanzine, Wha-a-am Magazine, we’d sell them at Uptones shows, and we featured them in one issue.

But it wasn’t only us mods there. Uptones shows were a melting pot of scenes, and also inter-generational. The skill, raw power & adrenaline with which they performed, appealed to a wide range of folks, not just to us. The guitar dudes loved them, the jazz heads loved them, the new wavers loved them, and even a lot of the punks loved them. And they came from all over to see them. However, there were some in the music press that would snarkily emphasize their ages, as in “they’re good for their age.” I was so mad at one piece in the Berkeley Voice that I wrote a letter to the editor, saying that if you saw them, no matter what your age, they would “knock your socks off.” They published that letter, with the headline, “Knock Your Socks Off,” and for a moment I was embarrassed, like all teenagers are embarrassed. But then I also knew I meant it, and it was true.

I do know my exposure to live music was exponentially expanded at such an impressionable age because I got to see so many other awesome bands early on, like R.E.M. & Madness, when The Uptones were the opener. They were also so encouraging to young bands, with many of my friends’ bands opening for them. One thing I never fully appreciated at the time was that The Uptones had a policy to play only all-ages shows. We were so spoiled and didn’t even know it! That was just one way they showed their respect and appreciation of their audience. Now, I already had a fake ID by the time I was 14, but because so many shows I saw were Uptones shows, for a lot of them I never even needed that ID. I have always said that I grew up not financially privileged, but culturally privileged. The Uptones will always be a major reason for that.
I’m so excited for this album. These recordings are from the original lineups of The Uptones. Compiled from restored analog tapes and the long out of print KUSA EP, these tracks have never been released digitally until now. They begin with the first song they recorded in 1982 and move chronologically through 1984. In fact, the first 6 tracks on this CD had never been released commercially at all. This is The Uptones while they were still in high school. HIGH SCHOOL. Listening to these songs now more than 30 years later, they still knock my socks off.